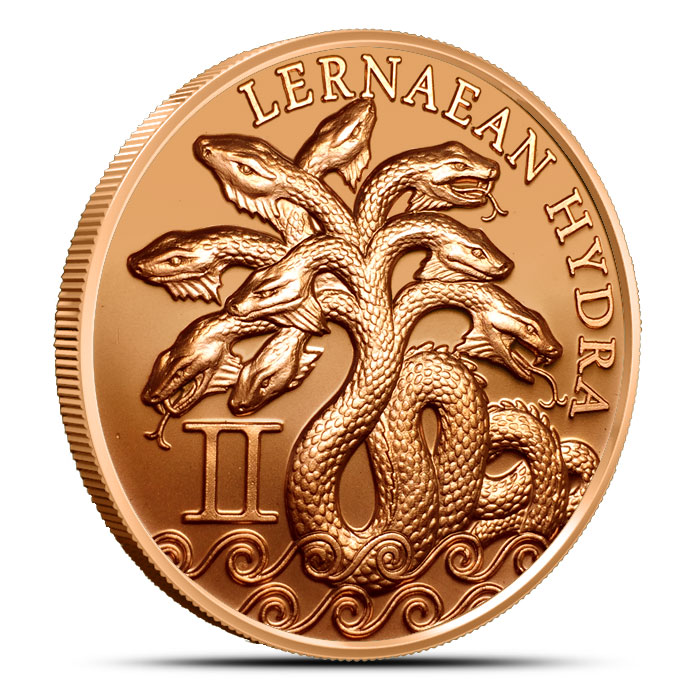 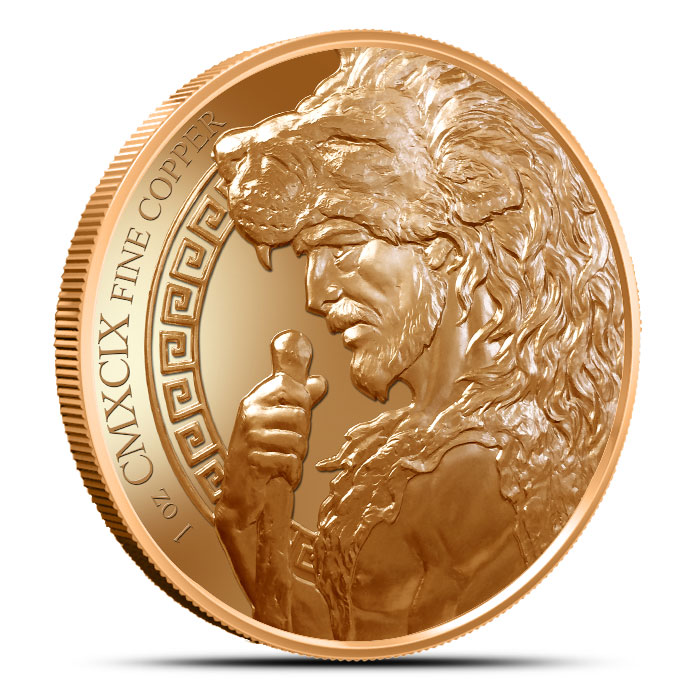 After defeating the Nemean Lion, Hercules was sent to slay the Lernaean Hydra for his second labor. The Hydra, a snake-like beast with multiple heads, was raised by Hera to destroy Hercules — making this an inevitable match up. In the face-off between Hercules and Hydra, the son of Zeus used a sword to slice off each of the creature’s necks, according to one popular tale. When the heads grew back, Hercules enlisted his nephew to burn each of the necks to halt regrowth. The Hydra had one mortal head, however; so Hercules used his golden sword to slay the mutant and complete his second labor.

The beast is displayed on the Second Labor coin, to be released in the 12 Labors of Hercules Series.

The reverse features the multi-headed Hydra in a striking position, displaying the daunting task Hercules faced. LERNAEAN HYDRA and II are inscribed.

The familiar obverse portraying Hercules with the Nemean Lion draped over his head as armor is shown on this round, as it will be on each round in the powerful series. “1 oz CMXCIX (999 in Roman numerals) FINE COPPER” is also displayed.

The 1 oz. Copper Lernaean Hydra rounds will only be available for one month from Oct. 12 through Nov. 12. Make sure to keep your 12 Labors of Hercules Series collection current before time runs out!

Driven crazy by Hera, Hercules slew his family — only regretful after recovering his sanity. King Thespius purified the son of Zeus, but to atone for his crimes, he was sent to serve King Eurystheus.

Eurystheus ordered Hercules to execute 10 Labors, which were a series of tasks carried out as penance for his actions. Hercules successfully completed all 10, but because his nephew helped with one and he planned to accept payment for another, Eurystheus forced Hercules to finish two more Labors alone.

Hercules’ Labors adhere to the traditional order of the Bibliotheca:

Commemorate the historic battle between Hercules and the Lernaean Hydra with this 1 oz copper round from Provident Metals.

"Another fun copper round. Great detail and high quality. Had not gotten into the copper rounds before this series. Looking forward to the entire series."
Joel from - November 12, 2014

"The Nemean Lion was okay. This round is gorgeous. The detail is incredible and very well-struck. I'll be interested to see the mintage numbers from here on out, because this is where interest in the series picks up. Hope you got your Nemean Lion! "
Warren from - October 17, 2014

"Had to have this after receiving the Nemean Lion coins. Kudos to the unnamed coin designer(s), s/he ranks right up there with the best of the US Mint sculptors. 12 Labors should be an impressive set if the other designs are as good as the first two. Looking forward to buying these month by months. Thanks, Provident."