Bullion Not Bits 1 oz Copper Round | Safety in Numbers 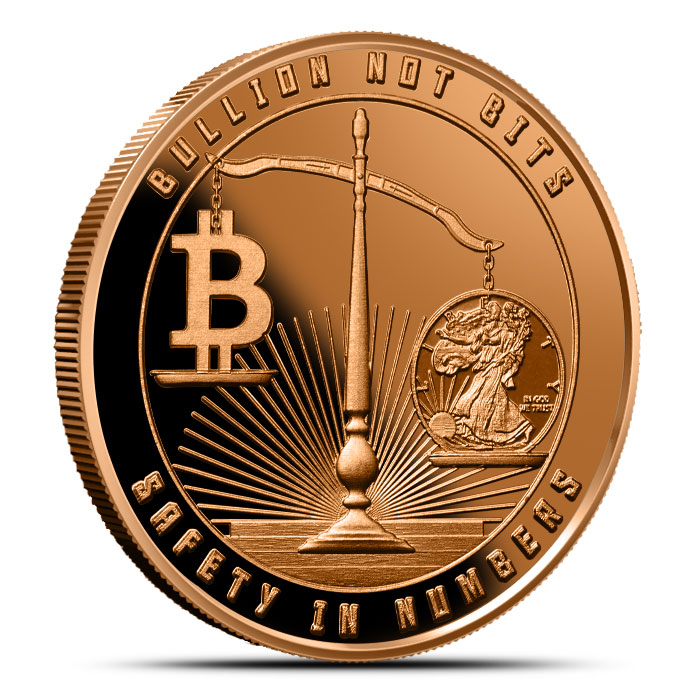 Diversification is crucial to preparing for the future, so expand your portfolio with this Bullion and Bits 1 oz Copper round — the sixth and final installment in the Osborne Mint’s Safety in Numbers series.

Safety in Numbers encourages early preparation for unexpected crises. Each round in the six-coin series is composed of .999 fine copper and highlights essential techniques for safeguarding your future.

The obverse of this Bullion and Bits round features a scale weighing a coin and a bitcoin. In the image, the coin clearly outweighs the bitcoin — because it is more reliable, accessible and secure. BULLION + BITS and SAFETY IN NUMBERS are inscribed.

The reverse showcases the Safety in Numbers emblem, featuring a family and a fist, protected by a shield with the phrase PROTECT THE FUTURE engraved at the top. REAL METAL – REAL VALUE are additionally engraved across the bottom.

Invest in the Safety in Numbers series by purchasing a Bullion Not Bits copper round, now available through Provident Metals.

About the Safety in Numbers Series

The primary theme behind Safety in Numbers is to encourage families to prepare for future crises. It stresses the importance of investing in precious metals and creating a stockpile of goods in case of future emergency.

In a world of where infrastructure is hacked on a daily basis, having reliable backup is vital. Introduced in 2009, Bitcoin is a type of online currency. Created by an anonymous person using the alias Satoshi Nakamoto, bitcoins are an uncertain, unstable form of currency. Bullion remains a far more dependable investment option.

About the Osborne Mint

Founded in 1835, the Osborne Mint was originally a private mint called Z. Bisbee Co, located in Cincinnati, Ohio. Established in the heart of downtown Cincinnati, 179 years later, the company remains just a few blocks from its original location.

In addition to holding the distinction of America’s oldest private mint, the company — among its countless achievements — minted presidential campaign medals for Abraham Lincoln’s successful executive run, manufactured more than five billion food ration tokens during WWII, and produced more transportation tokens than any other private mint in the country.