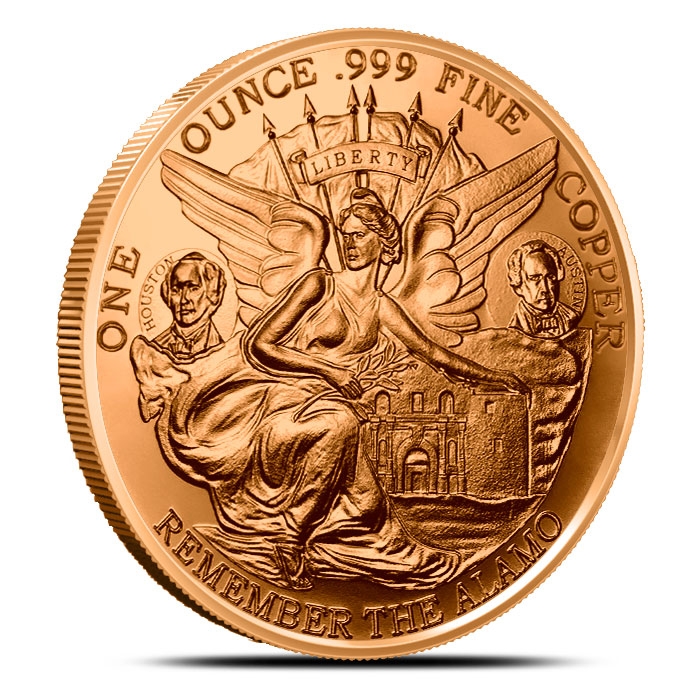 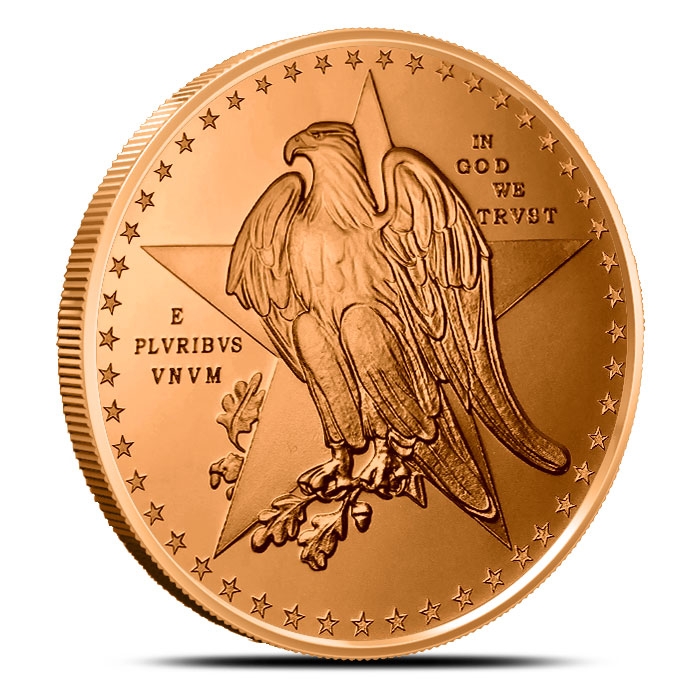 Like the reverse, the round’s front side closely follows the design of the 1934-1938 Texas Commemorative Half Dollar. The primary design element is an eagle perched on a branch in front of the iconic Texas Lone Star.

Like the original vintage Texas Commemorative Half Dollar, the reverse of this copper round is loaded with intricate design elements. The Angel of Victory is surrounded by Stephen F. Austin, Sam Houston, the Six Flags of Texas, and the Alamo. The battle cry “REMEMBER THE ALAMO” is engraved towards the bottom.

About the Texas Commemorative Copper Round

The state of Texas boasts a unique history unlike any other in the union. Before joining the United States in 1845, Texas had already been part of four different countries! The territory was settled by the French in the 1600s, seized by Spain in 1690, claimed by Mexico in 1821, and declared an independent republic in 1836. These changes did not happen quietly with a simple treaty signing. With each shift in sovereignty came periods of intense war.

The Texas Revolution of 1835-1836 was no exception. The colonists of Texas, with the help of some Americans, battled Mexican troops in a quest for independence. Initially the Texian army suffered some crippling defeats, such as the Battle of the Alamo. Despite sustaining major losses, these setbacks served as motivation for the Texian military. They would eventually overcome the Mexicans and establish their own republic.

The Republic of Texas only lasted nine years, but the state has always been proud of its war for independence. The war and subsequent victory are viewed as proof of Texas’ strength and resilience. To celebrate the 100th anniversary of Texas’ independence, the state petitioned Congress for a commemorative Half Dollar. The coin would have a face value of 50c but would be sold for $1; the profits would help fund the creation of a memorial building.

After being authorized by Congress in 1933, the task of designing the coin fell to Pompeo Coppini. He was Italian-born but a San Antonio resident whose work already appeared in many Texas towns. His resume included designing public monuments and sculptures in Austin, Waco, Huntsville, Gonzalez, Paris, and College Station.

As for the Texas commemorative coin, Coppini’s goal was to incorporate as many Texans and state symbols as he could. Despite being the size of a standard Half Dollar, the coin manages to include the Lone Star, the Alamo, Stephen F. Austin, Sam Houston, The Six Flags of Texas, and the goddess Victory. It is one of the most intricately-designed of all United States coins and, as such, enjoys tremendous popularity.

The Texas Centennial Commemorative Half Dollars of 1934-1938 are prized collectibles and can sell for substantial sums of money. High-grade examples have sold for $15,000 or more at auction! Now, this iconic design is available as a new copper round. Provident is excited to offer a new line of Texas copper rounds featuring the stunning motif of the 1934-1938 Texas commemorative Half Dollar. The design has been masterfully recreated; it captures the coin’s original splendor and highly intricate detail.