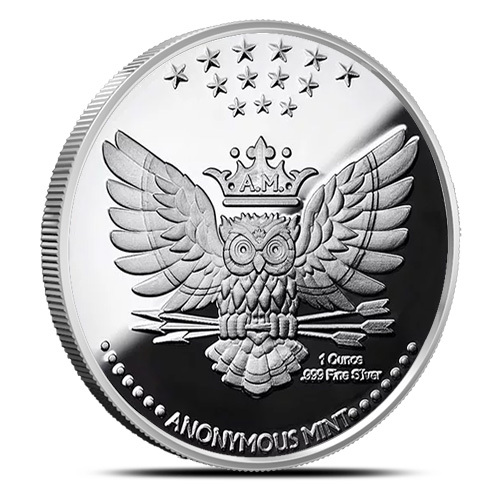 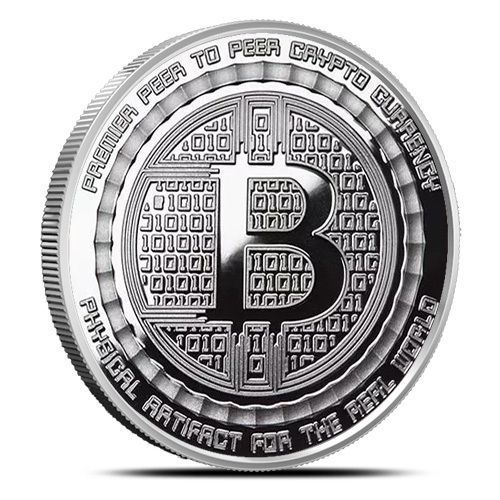 Bitcoin is a crypto currency that was first introduced in 2009. In the years since, this form of digital currency has seen an increase in popularity, with more retailers accepting it as an acceptable form of currency. Today, there are hundreds of other crypto currencies in existence, with Bitcoin being the oldest, most widely accepted and the most highly valued.

While Bitcoin cannot be held in your hand, this beautifully designed 1 oz silver round serves as a physical representation of this popular digital currency. The obverse of the coin features the Bitcoin logo, while the reverse of the coin depicts the Anonymous Mint owl logo. The Anonymous Owl silver round is made from one ounce of .999 fine silver.

Bitcoin, the leading digital currency, was first registered in 2008. It wasnt until 2009 that the crypto currency was debuted to the global market. Cryptocurrencies exist solely in the digital world and are not issued or backed by any central banks or governments. The Bitcoin Anonymous Owl Silver Round was designed and released by Anonymous Mint. It is the second in the series of Bitcoin-inspired designed by Anonymous Mint. Each of the rounds arrives with a numbered Certificate of Authenticity, which will match the serial numbers of the lettered edge of the rounds.

The obverse of the Bitcoin Anonymous Owl Silver Round features the Bitcoin logo, which is very similar in design to the dollar symbol. A large letter B with two vertical lines stands as the memorable logo for this cryptocurrency. Also on the obverse of the coin is binary code, which stands as a reminder of the digital-only status of this form of currency.

The reverse of the Bitcoin Anonymous Owl Silver Round features the detailed mint logo belonging to Anonymous Mint. The owl is symbolic of wisdom, but also of mystery and intelligence, which makes it a good choice in logo. The wings of the owl are spread out, with three arrows clutched firmly in the talons of the wise bird. Floating just above the head of the owl, with his large almost hypnotic eyes, with a crown that features the letters A.M. A cluster of 13 stars is displayed above the owl and the crown. The owl, with spread wings, is a fun homage to the United States heraldic eagle.

This piece is a round, which means that it is minted by a private mint and holds no face value. Rounds are not intended to be circulated as currency, but are rather symbolic of the events or interests that they commemorate. With a mirrored shine to it, this silver round was designed with great attention to detail.

Do you have questions about the Bitcoin Anonymous Owl Silver Round? Take the time to call us at Provident Metals, at 1-800-313-3315. You can also get your questions answered by sending us an email. Alternatively, you can connect live with an expert, using our websites chat feature.