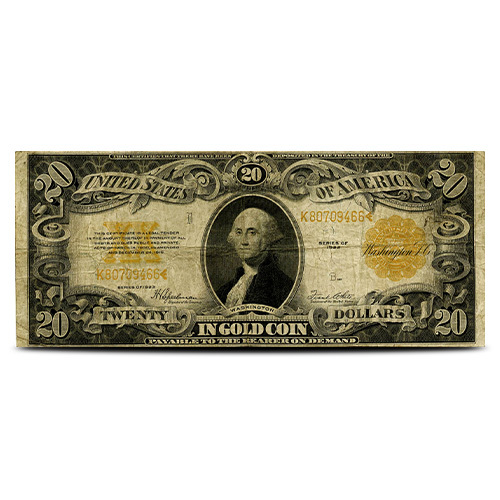 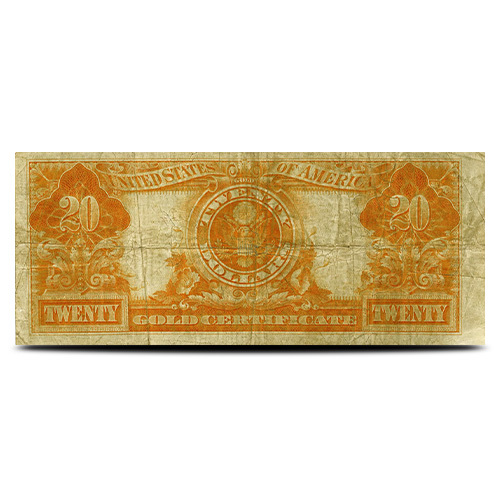 On the obverse of 1906-1922 $20 Gold Certificates is a depiction of President George Washington. This image of Washington first appeared on the 1905 Series, but was quickly redesigned in 1906 to remove the yellow ink background, change the red-ink Treasury seal to yellow ink, and removed the yellow ink printed on 20 IN GOLD COIN. The 1906 Series and 1922 Series notes available here are visibly identical with one exception. The 1922 Series features a notation over the XX Roman numerals that reads THIS CERTIFICATE IS A LEGAL TENDER IN THE AMOUNT THEREOF IN PAYMENT OF ALL DEBTS AND DUE PUBLIC AND PRIVATE. ACTS OF MARCH 14, 1900, AS AMENDED AND DECEMBER 24, 1919.

The reverse field of the 1906-1922 $20 Gold Certificate includes the heraldic eagle of the United States at the center. The eagle is shown in front-facing relief supporting the US national shield with the arrows of war and the olive branch of peace in its talons. Around the eagle is a notation of TWENTY DOLLARS. Above the design is UNITED STATES OF AMERICA and GOLD, with GOLD CERTIFICATE below. The upper corners have 20 noted, with TWENTY in the lower corners.

1906-1922 $20 Gold Certificates listed here are in Fine+ condition. These notes have considerable signs of wear and tear that include rounded corners, margin splits, and fold lines. Please note the specific series you receive and signature combinations can vary or could all match.

Please contact Provident Metals with your questions. Our team is available at 800-313-3315, online using our live chat, and via our email address.