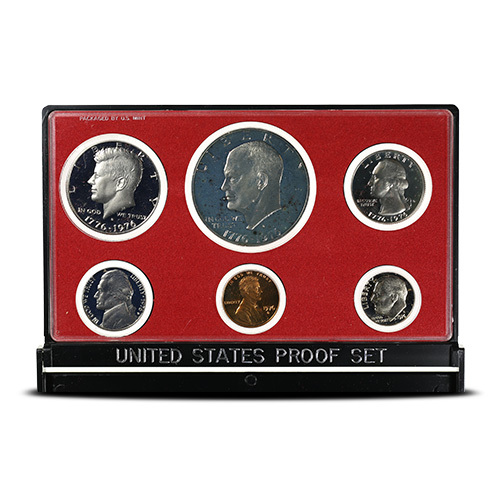 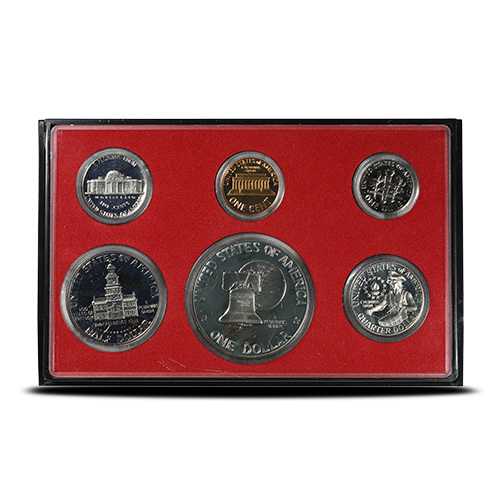 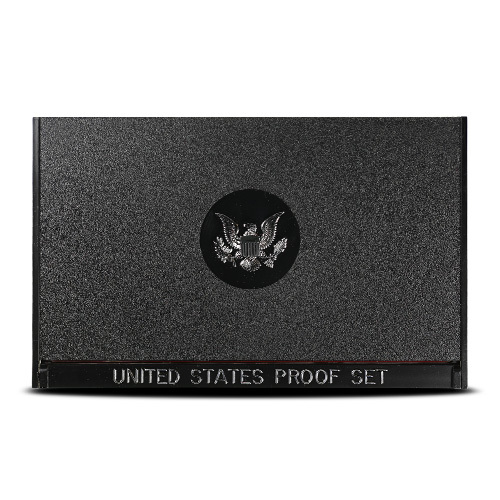 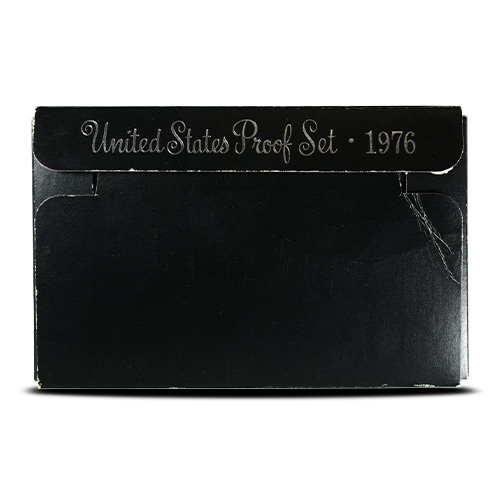 Due to the Bicentennial, there was an increased demand for 1976 US Mint Proof Sets. As a result, the US Mint sold 4,149,730 of the 1976 Proof Sets, making it THE most popular Proof Set, even to this day. It was still a 6 coin set, with every coin in the set – except the Lincoln Cent being a Proof-only issue. The mirror-like Proof finish on the coins enhanced their beauty. This set was made by the US Mint in San Francisco. Currently, Provident Metals has the 1976 US Mint Proof Set available for purchase.

The coins are placed in individual raised rings that are arranged on a red felt-covered paper insert. The beauty and shine of the coins really stands out against this red background. The coin-filled red paper is sealed in a two-piece clear plastic case. The clear plastic case is then inserted into a black plastic frame, that opens and closes and can be used to display the coins.

The obverse designs on each of the coins in this Proof Set are the standard obverse designs these coins have had for years. However, the inscriptions of the year on the Washington Quarter, Kennedy Half Dollar and Eisenhower Dollar, rather than being just 1976 were 1776-1976, to commemorate the Bicentennial.

The reverse design on the Bicentennial Washington Quarter features a left-facing Colonial drummer, with a victory torch over his right shoulder that is encircled by 13 stars. This design was created by Jack L. Ahr, owner of his own commercial art company. This was on the Washington Quarter during 1975 and 1976. Inscriptions on the reverse are UNITED STATES OF AMERICA, E PLURIBUS UNUM, and QUARTER DOLLAR.

The reverse design on the Bicentennial Kennedy Half Dollar features a frontal view of Independence Hall in Philadelphia. The inscription 200 YEARS OF FREEDOM sits to the left of Independence Hall. This design was created by Seth G. Huntington, head of the art department at the marketing firm of Brown & Bigelow. Inscriptions on the reverse are UNITED STATES OF AMERICA, E PLURIBUS UNUM, and HALF DOLLAR.

The reverse design on the Bicentennial Eisenhower Dollar features the Liberty Bell superimposed against the Moon. This design was created by Dennis R. Williams, an art student at the Columbus College of Art and Design. Frank Gasparro, of the US Mint, slightly modified the design, thus there was a Type I and Type II version. Inscriptions on the reverse are UNITED STATES OF AMERICA, E PLURIBUS UNUM, and ONE DOLLAR.

The National Sculpture Society, at the request of the Treasury Department, conducted a contest to get the designs for the reverse of the Bicentennial coins. The 3 design winners had never before, nor since, worked for the US Mint.

The Proof Set contains one each of the Lincoln Cent, Jefferson Nickel, Roosevelt Dime, Washington Quarter, Kennedy Half Dollar, and Eisenhower Dollar. They are copper-nickel clad.

Have questions? If so, Provident Metals Customer Service is available to assist you. We can be reached via phone at 800-313-3315, online using our live chat, or via our email address.