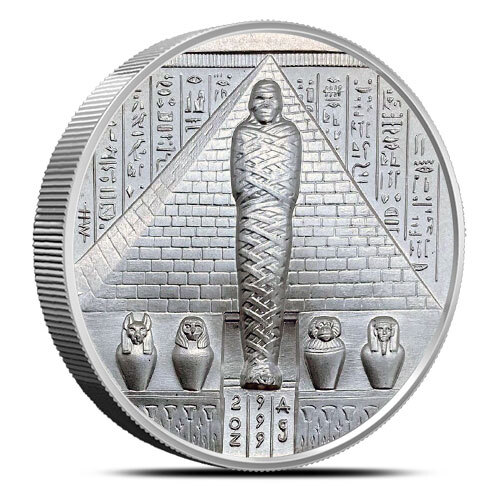 Out of Stock
Sorry! We're sold out right now.
NOTIFY ME
BUY BACK PRICE: $59.96
Add to WishlistLog In to add this product to your Wishlist

The popular Egyptian Gods Series of ultra-high-relief rounds is now back at Provident Metals with all-new designs leading the program forward. After the initial releases of Cleopatra, Anubis, Sobek, and Khnum, the series picks up on release number five with one of Egypts oldest gods, Osiris. The father of Horus and god of fertility, agriculture, the afterlife, and the dead, Osiris is captured in a design that is detailed and intricate. Today, you have the opportunity to get the new 2 oz Silver Egyptian Gods Osiris Round online at Provident Metals.

With the return of the Egyptian Gods Series, designer Heidi Wastweet lends her talents and creativity to the series once again after creating the original four designs released years ago. Ms. Wastweets career began in 1987 and she has worked as Chief Engraver at the Sunshine Mint and as the lead designer/sculptor for the Global Mint. Today, she is an independent artist and has most recently contributed in areas such as the US Mints Artistic Infusion Program. She has more than 1,000 coin and medal designs to her credit from the last 30-plus years.

The resurrected figure of Osiris is depicted on the obverse of all 2 oz Silver Egyptian Gods Osiris Round. Osiris was a primeval king of Egypt who was murdered by his brother, Set, and dismembered afterward with his body parts strewn in a river. The wife of Osiris, Isis, collected his body parts and wrapped his body back together, using magic to resurrect him for a brief time. Osiris is depicted here with the Atef crown on his head, crook and fail in his hands, and a pharaohs beard. The cartouche to the right side of the design field with three symbols is representative of the name Osiris.

In the reverse design element of the 2 oz Silver Egyptian Gods Osiris Round, you will find an image of his mummified remains. Isis was able to temporarily resurrect her husband following his death and dismemberment, afterward mummifying his remains. Osiris is one of the first Egyptian gods associated with the practice of mummification. Other elements of the design include a pyramid in the background, a wall of hieroglyphs, and pots at the feet of Osiris.

Osiris is the first design in the continuation of the popular Egyptian Gods Series. The first recorded evidence of worship of Osiris dates to the 25th century BC during the Fifth Dynasty, though many scholars believe he was worshipped even before that time.

2 oz Silver Egyptian Gods Osiris Rounds are available as ultra-high-relief rounds with deep visual fields and greater 3D relief on the designs. Each one is housed individually in a protective plastic flip or in acrylic mint tubes of 10.

"The Egyptian Gods series is back! Simply beautiful."