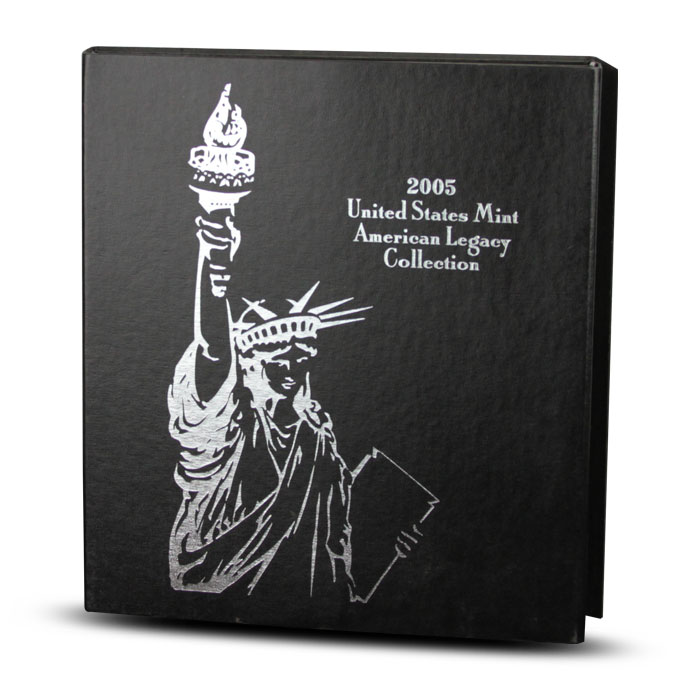 Commemorate a birthday, anniversary, special year or your savvy investment strategy with the 2005 American Legacy Collection from the U.S. Mint.

This fine boxed set includes 13 beautiful proof-condition coins minted in 2005. They arrive in secure plastic cases with a certificate of authenticity and display case.

Coins in this set include:

Released on Marshall’s 250th birthday, this coin recognizes his service as the fourth leader of the highest court in the land. Marshall instituted the practice of a majority opinion and authored many significant landmark decisions.

The obverse shows the formal grand room where the Supreme Court meets, chairs set out for each justice. The domed roof highlights the room’s elegance. The bottom rim is engraved with E PLURIBUS UNUM, ONE DOLLAR and UNITED STATES OF AMERICA.

The coin is composed of 90 percent silver and 10 percent copper.

Honor the men and women who serve our country with a Marine Corps 230th Anniversary Silver Dollar. The obverse features a rendition of the famous photo of Marines raising the American flag on Iwo Jima in World War II. The word LIBERTY stretches over an open field, and the words IN GOD WE TRUST are nestled to the right of the flag. To the left are the words MARINES 1775 2005. The date of mintage is engraved in the soil at the Marines’ feet.

The reverse depicts the Eagle, Globe and Anchor, the official emblem of the Marine Corps. Along with a border of 13 stars, the rim includes the words UNITED STATES OF AMERICA and ONE DOLLAR, with E PLURIBUS UNUM and Semper Fidelis in a smaller font.

The coin is composed of 90 percent silver and 10 percent copper.

The Sacagawea Golden Dollar is a clad coin with a composition of 88.5 percent copper, 6 percent zinc, 3.5 percent manganese and 2 percent nickel. This unique composition allows vending machines to recognize these quarter-sized coins.

The obverse shows Shoshone woman Sacagawea carrying her infant son as she leads Lewis and Clark across the Western wilderness. The word LIBERTY is overhead, with IN GOD WE TRUST to the left, and the year to the right.

The reverse features a soaring eagle, wings outstretched. The words UNITED STATES OF AMERICA and ONE DOLLAR circle the rim. The phrase E PLURIBUS UNUM is in the middle of the field.

The Kennedy Half Dollar features a portrait of President John F. Kennedy. The words LIBERTY and 2005 are engraved around the rim on the obverse, with IN GOD WE TRUST across the bottom.

The reverse shows the Great Seal of the United States, with the words UNITED STATES OF AMERICA and HALF DOLLAR.

This is a proof-quality Roosevelt dime, giving the common currency a brilliant finish. The reverse shows President Franklin Roosevelt in portrait, with LIBERTY near the rim, along with the words IN GOD WE TRUST and the year.

The obverse features an oak branch, a flame of victory, and an olive branch. The words E PLURIBUS UNUM appear interlaced with the symbols of strength, peace and victory. UNITED STATES OF AMERICA and ONE DIME are inscribed around the rim.

This pair of nickels features two scenes honoring explorers Meriwether Lewis and William Clark and their momentous journey to the far reaches of the United States.

One coin showcases a buffalo, with the words UNITED STATES OF AMERICA, FIVE CENTS and E PLURIBUS UNUM. The other includes a beautiful vista as seen from modern-day Washington State, emblazoned with “Ocean in View! O! The Joy!” a phrase taken from the journals of the explorer pair. Around the rim of this coin are the words E PLURIBUS UNUM, UNITED STATES OF AMERICA, LEWIS & CLARK 1805 and FIVE CENTS.

The reverse of both coins includes a portrait of President Thomas Jefferson, who commissioned the exploration. The words IN GOD WE TRUST and LIBERTY are inscribed, along with 2005.

No set would be complete without a shiny new penny. The 2005 Lincoln Cent includes the familiar portrait of President Abraham Lincoln with the words IN GOD WE TRUST, LIBERTY and 2005. The reverse shows the Lincoln Memorial and the words UNITED STATES OF AMERICA, E PLURIBUS UNUM and ONE CENT.

All five of the 50 State Quarters released in 2005 include the familiar portrait of President George Washington on the obverse, along with the words UNITED STATES OF AMERICA, QUARTER DOLLAR, LIBERTY and IN GOD WE TRUST.

The reverse of the California state quarter celebrates conservationist John Muir and Yosemite Valley. Muir stands looking out over the beautiful scene as a California condor soars past. The words CALIFORNIA, 1850, E PLURIBUS UNUM and 2005 are near the rim. The name JOHN MUIR is marked on the left, and YOSEMITE VALLEY is engraved to the right.

The Minnesota state quarter celebrates the region’s countless waterways, as well as its distinctive map shape. The phrase LAND OF 10,000 LAKES is marked within an emblem of the state, and a boater and a duck float on the still waters. MINNESOTA, 1858, 2005 and E PLURIBUS UNUM are on the rim.

The natural beauty of Crater Lake is memorialized on the Oregon quarter, with a soft vista scene featuring still waters and a towering tree. The coin is marked CRATER LAKE, along with the words OREGON, 1859, 2005 and E PLURIBUS UNUM.

A lumbering bison looks for good grazing on the reverse of the Kansas state quarter, while a few sunflowers — the state flower — cheerily reach for the sky. This coin is further marked with KANSAS, 1861, 2005 and E PLURIBUS UNUM.

The final coin in the 2005 State Quarter series shows the feat of human engineering that is the bridge over the New River Gorge, etched in careful detail. The scene is labeled with NEW RIVER GORGE, and the words WEST VIRGINIA, 1863, 2005 and E PLURIBUS UNUM are near the rim.

Only 50,000 of these sets were produced by the and they can no longer be purchased from the U.S. Mint — so snag the 2005 American Legacy Collection today.