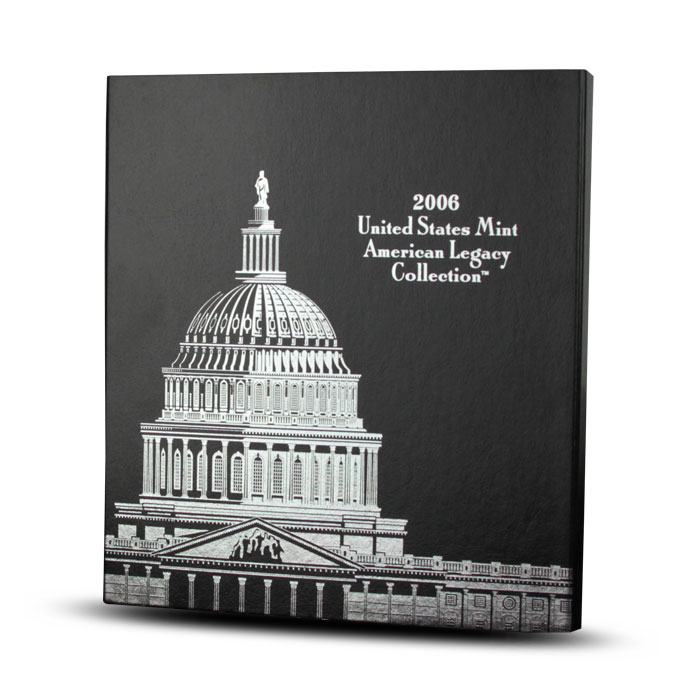 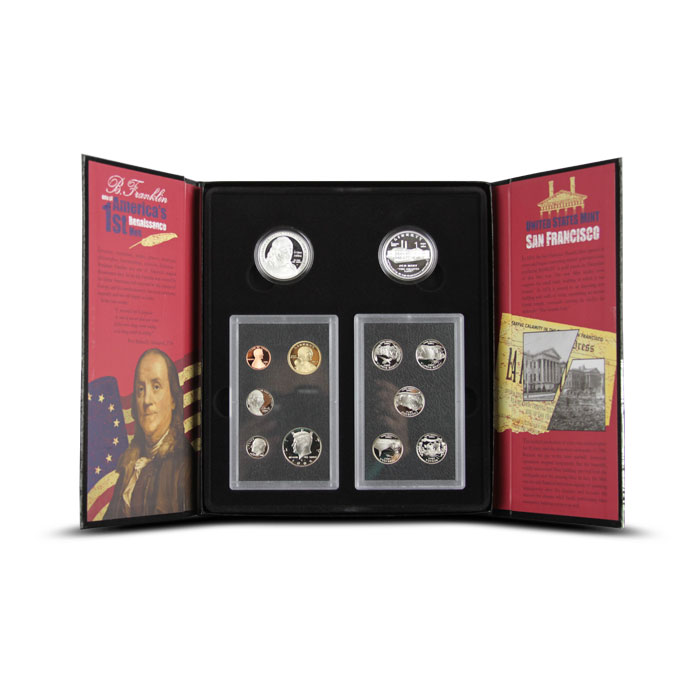 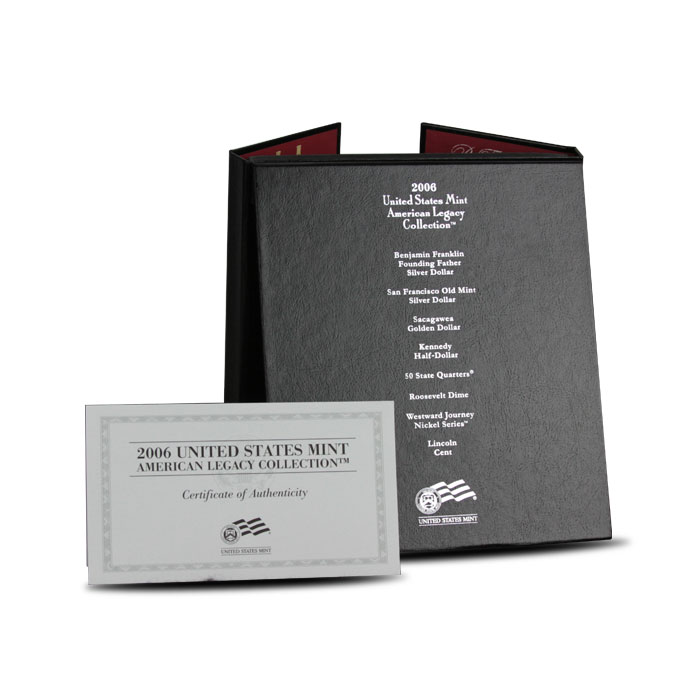 Pay homage to some of the most beautiful coins ever produced by the United States Mint with the 2006 American Legacy Collection. The set features proof versions of the circulating currency minted that year.

A portrait of a middle-aged Benjamin Franklin graces the obverse of this shining silver dollar. His signature is engraved below, and the years 1706 and 2006 are to the right — indicating the coin was created to commemorate Franklin’s 300th birthday. The words IN GOD WE TRUST are inscribed below. The rim is marked with BENJAMIN FRANKLIN TERCENTENARY and LIBERTY.

The reverse includes a replica of the 1776 Continental Currency dollar, in honor of Franklin’s many contributions to the development of the United States and our currency. The interior replica coin includes a sun glyph shining on a sundial. Below are the words MIND YOUR BUSINESS.

FUGIO is inscribed near the sun, with EG FECIT below. The outer ring of the replica reads CONTINENTAL CURRENCY 1776. The final ring, in shining mirror finish, reads ONE DOLLAR, UNITED STATES OF AMERICA and E PLURIBUS UNUM.

Commemorating the Granite Lady, this silver dollar showcases the Old San Francisco Mint. Not only did the mint produce several important coins, it survived the earthquake of 1906 and was vital to the city’s recovery.

The obverse shows a view of the mint, as well as the words OLD MINT “THE GRANITE LADY.” LIBERTY arches overtop, and the bottom rim reads INSTRUMENTAL IN SAN FRANCISCO’S RECOVERY. E PLURIBUS UNUM and 1906 2006 are also on this side.

The reverse includes a replica of the 1904 Morgan Silver Dollar eagle reverse, designed by George T. Morgan. An eagle clutches arrows and an olive branch in its talons. The words “In God we trust” are indicated above the bird, and UNITED STATES OF AMERICA and ONE DOLLAR are around the rim.

This “golden dollar” is not composed of gold at all—its yellow sheen comes from a composite of several metals.

The obverse shows a portrait of Sacagawea carrying her infant son, celebrating her heroism in guiding the Corps of Discovery to explore the American frontier. The rim includes the inscriptions LIBERTY, IN GOD WE TRUST and 2006.

The reverse features a soaring eagle image, along with the words UNITED STATES OF AMERICA, ONE DOLLAR and E PLURIBUS UNUM.

The obverse of this coin includes a portrait of President John F. Kennedy facing left. The words LIBERTY and 2006 are inscribed around the rim, with IN GOD WE TRUST across the field.

The reverse features the Great Seal of the United States, with the words UNITED STATES OF AMERICA and HALF DOLLAR inscribed.

President Franklin Roosevelt faces left on the obverse of this dime. The word LIBERTY is inscribed at the front of his profile, and IN GOD WE TRUST is written in small characters near the bottom. The year is also featured.

The reverse includes an oak branch, a torch and an olive branch. The words UNITED STATES OF AMERICA and ONE DIME are inscribed around the rim, and E PLURIBUS UNUM is at the center.

This coin is an alteration of the typical nickel design, featuring Thomas Jefferson’s famous home, Monticello. The building graces the reverse, with MONTICELLO noted below the image. The words E PLURIBUS UNUM, UNITED STATES OF AMERICA, and FIVE CENTS are also inscribed.

The obverse features a slightly-smiling Jefferson as he looks toward the viewer. LIBERTY is written in script to the right, along with 2006 and IN GOD WE TRUST.

No set would be complete without a shiny new penny! The Lincoln Cent includes the famous portrait of President Abraham Lincoln, inscribed with the words IN GOD WE TRUST, LIBERTY and 2006 on the obverse. The reverse includes the Lincoln Memorial and the words UNITED STATES OF AMERICA, ONE CENT and E PLURIBUS UNUM.

Each of the 50 State Quarters produced in 2006 includes the same reverse: the profile of President George Washington, along with the words UNITED STATES OF AMERICA, QUARTER DOLLAR, LIBERTY and IN GOD WE TRUST.

This quarter celebrates Nevada’s status as the Silver State, including a herd of thundering horses, a rising sun, wildflowers, and a banner reading THE SILVER STATE. It is also inscribed with NEVADA, 1864, 2006 and E PLURIBUS UNUM.

Celebrating the state’s status as a landmark on the Oregon Trail, the Nebraska Quarter marks Chimney Rock, a towering rock formation. A pair of oxen pull a covered wagon as the sun shines on the scene. The words CHIMNEY ROCK mark the place, and the inscriptions NEBRASKA, 1867, 2006 and E PLURIBUS UNUM are marked on this side.

The natural beauty of Colorado is commemorated on this state quarter. Towering mountains and evergreen trees decorate the reverse, with a banner reading COLORFUL COLORADO. The coin is also inscribed with COLORADO, 1876, 2006 and E PLURIBUS UNUM.

A pair of buffalo graze the reverse of the North Dakota Quarter. A canyon dips in the background as the sun rises. The coin is emblazoned with NORTH DAKOTA, 1889, 2006 and E PLURIBUS UNUM.

South Dakota’s most famous landmark has been reproduced on the state’s quarter, including the four famous faces of the Mount Rushmore monument. A Chinese Ring-Necked Pheasant flies by, and two heads of wheat encircle the design. The coin is marked with SOUTH DAKOTA, 1889, 2006 and E PLURIBUS UNUM.

This set comes with a black silver-embossed slipcover, a black leatherette display, and capsules for each coin. The interior highlights Benjamin Franklin and the San Francisco Mint facility. A certificate of authenticity is included in a secure envelope.

Bring this stunning collection home today. Order a 2006 American Legacy Collection through Provident Metals before the set is gone!