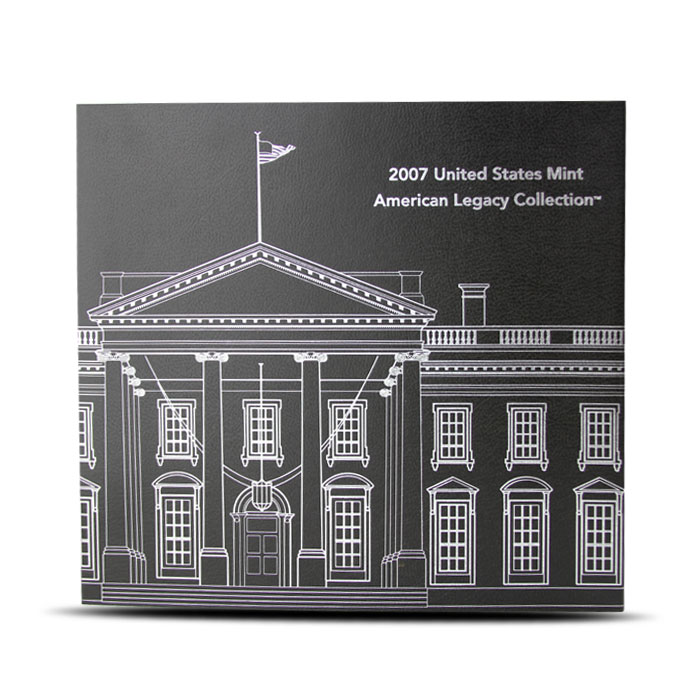 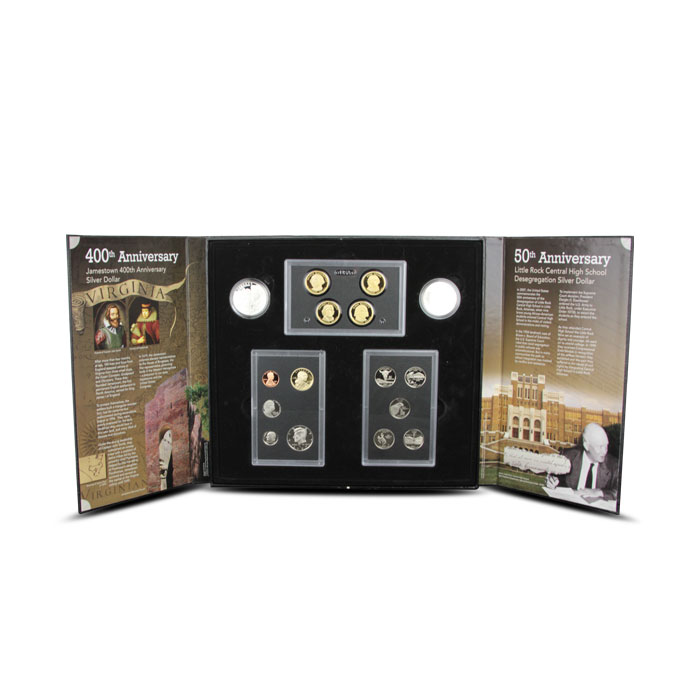 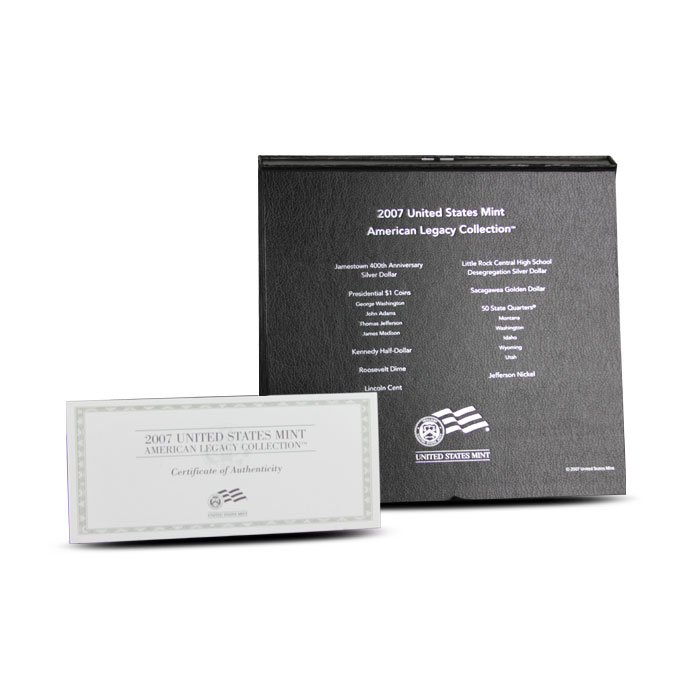 Own the best examples of United States Mint currency with the 2007 American Legacy Collection. This gorgeous box set includes 16 coins produced that year, each in a brilliant mirrored proof condition.

The obverse of this beautiful silver dollar includes three tall-masted ships — the Susan Constant, the Godspeed and the Discovery — which brought the first settlers to Jamestown in the New World.

The reverse features “The Three Faces of Diversity,” including an African, Captain John Smith and an American Indian. The phrase FOUNDING JAMESTOWN is inscribed below the trio, and the years 1607-2007 are below, indicating the 400th anniversary.

In honor of the bravery of African American students who first dared attend a previously whites-only school in Little Rock, this silver dollar features military boots and the butt of a rifle among the skirts and trousers of high school students.

This powerful image reminds the viewer it took an armed guard from the United States military to escort these children to school. The words DESEGREGATION IN EDUCATION are emblazoned below, along with the year 2007.

The reverse features the famous building where this pivotal moment took place, shown in careful detail. It is inscribed with the words LITTLE ROCK CENTRAL HIGH SCHOOL below.

The obverse shows Shoshone guide Sacagawea carrying her infant son on her back as she leads explorers Meriwether Lewis and William Clark across the Western United States. The reverse includes a soaring eagle.

The obverse of this coin features a portrait of President John F. Kennedy, with the Great Seal of the United States on the reverse.

This is a proof version of the circulating Roosevelt dime. President Franklin Roosevelt is in profile on the obverse, and an oak branch, a torch and an olive branch are on the reverse.

The obverse of this special edition nickel includes a portrait of President Thomas Jefferson looking out at the viewer. The reverse features the image of his home, with the name MONTICELLO below the artful design.

This pretty penny is a proof version, more shiny than any found in your wallet. President Abraham Lincoln’s portrait is on the obverse, and the Lincoln Memorial — including a tiny Lincoln statue — is on the reverse.

The 41st quarter in the 50 States collection features a bison skull hovering against a clear field, an image based off Montana artists Charles Russell’s work. The Montana landscape unfurls below, and the words BIG SKY COUNTRY are to the right. MONTANA and 1889 are near the top rim.

The reverse of the Washington Quarter depicts a king salmon leaping out of a lake, with Mount Rainier in the distance. The slogan THE EVERGREEN STATE is to the right of the fish, and WASHINGTON 1889 is near the top.

Though it is not the state bird, the Idaho Quarter features the Peregrine Falcon prominently on the reverse. It also includes the distinctive map-shape of the state, with a star to indicate the capitol of Boise. The words from the state motto, ESTO PERPETUA, are to the right, with IDAHO 1890 near the top rim.

The reverse of the Wyoming Quarter includes the iconic “bucking bronco” silhouette, along with the words THE EQUALITY STATE. The motto comes from the state’s role in the Women’s Suffrage movement. The state joined the union in 1890 and the name WYOMING is near the top rim.

The reverse of the Utah State Quarter features two train locomotives meeting face to face, a large railroad spike hovering between. The mountains rise in the background, and the words CROSSROADS OF THE WEST are overhead. The name UTAH and the year the state joined the union, 1896, float near the rim.

Because each piece is circulating currency, by law they include the words LIBERTY, IN GOD WE TRUST, the date of mintage, UNITED STATES OF AMERICA and E PLURIBUS UNUM.

Each of the 50 State Quarters features the same obverse: President George Washington and the phrase QUARTER DOLLAR.

The solemn portrait of the first president was designed by Joseph Menna. The top rim bears his name, GEORGE WASHINGTON, and the bottom rim reads 1st PRESIDENT 1789-1797.

John Adams glances out at the viewer, and the delicate ruffles of his shirt show clearly in this proof coin. JOHN ADAMS is marked near the top, with 2nd PRESIDENT 1797-1801 on the bottom rim.

The nation’s third president stares boldly out, thirsty for knowledge. THOMAS JEFFERSON is written overtop and 3rd PRESIDENT 1801-1809 is below.

The flowing curls of James Madison are well-designed on his presidential dollar. JAMES MADISON is written near the top rim, with 4th PRESIDENT 1809-1817 near the bottom.

The obverse of each Presidential Dollar shows the Statue of Liberty, torch held aloft. The words UNITED STATES OF AMERICA circle the rim, and the denomination of $1 is to the left. Though these coins have a golden sheen, they contain no gold but rather a composite of several metals.

The set comes with a black slipcover and a beautiful tri-fold leatherette case. The interior panels celebrate the 400th Anniversary of the founding of Jamestown and the 50th anniversary of the Desegregation of Little Rock Central High School, which launched the Civil Rights movement. Each set also includes a certificate of authenticity.