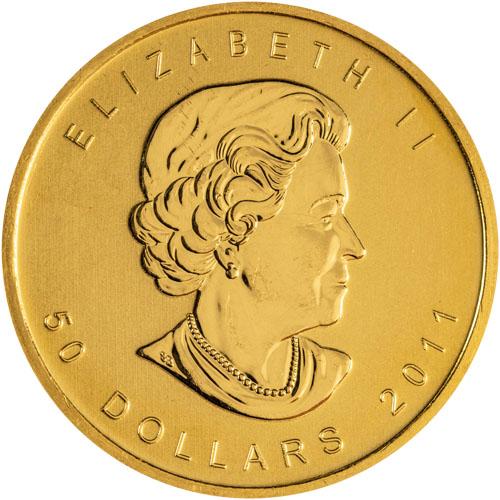 The most famous Canadian Gold coins issued are the Canadian Maple Leaf Gold coins. The purity of their gold is hard to match, much less beat. They are considered to be one of the oldest gold bullion coins available today and are one of the best-selling gold coins. Many rate it as the premier product of the Royal Canadian Mint. Provident Metals is pleased to offer the 2011 Canadian Maple Leaf 1 oz Gold Coin available for purchase right now.

The Canadian Maple Leaf Gold coin is considered to be legal tender and is among the purest official gold bullion coins worldwide. As a result of the consistency of its design and its mintage, it is regarded as the standard by which other 24-karat gold bullion coins are rated.

The 2011 1 oz Maple Leaf Gold coin obverse features a profile portrait of Queen Elizabeth II. Canadian artist Susanna Blunt created this particular design of Her Majesty in 2003. It is the first coin to show the Queen without her crown. Since 1952, when the Queen ascended to the throne, all Canadian coinage has featured some version of Queen Elizabeth II. Also on the obverse are ELIZABETH II and 50 DOLLARS 2011.

The 2011 1 oz Maple Leaf Gold coin reverse features the Maple Leaf, the unofficial emblem of Canada. Continuing basically unchanged since its creation in 1979, this Maple Leaf design was created by master engraver Walter Ott. For Canadians, the Maple Leaf is a symbol of pride and nationalism. Also on the reverse are CANADA, 9999, FINE GOLD, and 1 OZ OR PUR.

If you have any questions, please contact our Provident Metals Customer Service team, as we are ready to assist you. We can be reached via phone at 800-313-3315, via our online live chat, or via our email.