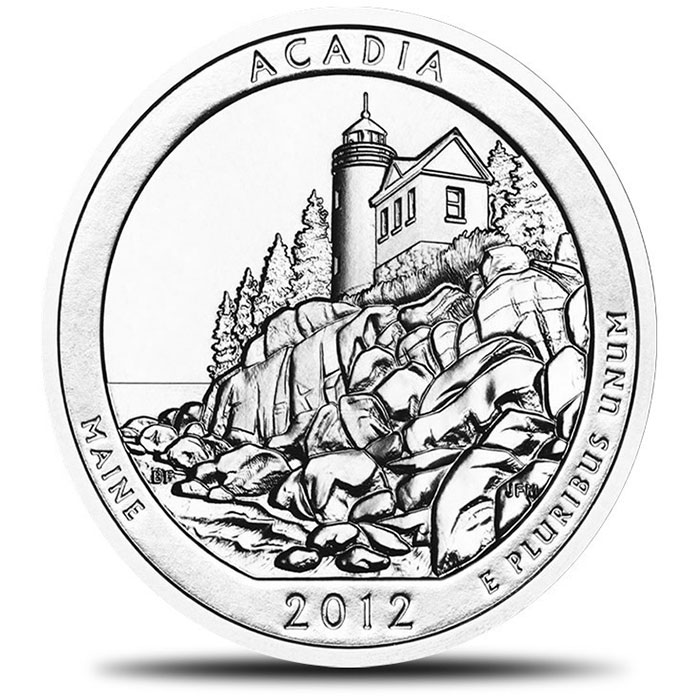 Out of Stock
Sorry! We're sold out right now.
NOTIFY ME
BUY BACK PRICE: $293.25
Add to WishlistLog In to add this product to your Wishlist

Patiently awaited by collectors and investors alike, Provident Metals is pleased to carry the 2012 Acadia National Park America the Beautiful (ATB), each coin boasting 5-Ounces of .999 Pure Silver. Struck in honor of Maine’s Acadia National Park–which preserves a number of beloved islands and part of the Schoodic Peninsula–it is the third ATB slated for release in 2012.

First protected by President Wilson in 1916, the region was initially called Lafayette National Park after the Marquis de Lafayette, an influential French advocate of the American Revolution. The site was renamed Acadia National Park in 1929.

Throughout the early years of the twentieth century, prominent philanthropist John D. Rockefeller, Jr worked tirelessly to develop Acadia National Park, funding more than 50 miles of navigable carriage trails and granite bridges for eager tourists. After forest fires ravaged the park in 1947, Rockefeller was largely responsible for funding the repairs, and the park’s majestic wildlife has since regrown.

The reverse of the Acadia National Park ATB was designed by Barbara Fox and features a portrayal of Bass Harbor Head Lighthouse, built snugly within Acadia’s craggy coastline, visited by 2.2 million tourists each year. The obverse of each ATB (including the coin’s clad quarter sister-series) features John Flanagan’s 1932 George Washington design.

Whether purchasing silver to diversify your portfolio or as a one-of-a-kind collector’s item, ATBs are a simple, affordable way to invest in your family’s future. Our secure online ordering system maintains the safety of your personal information, while your order arrives swiftly at your door.