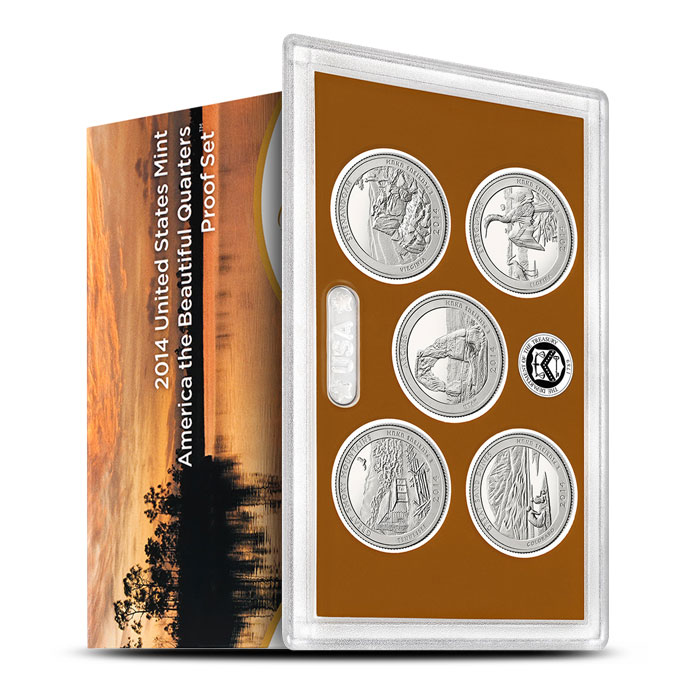 Order the 2014 America the Beautiful Quarters Proof Set, and not only enjoy the stunning art of each design but celebrate the natural beauty of each state at the same time.

Because these are designs made for circulating currency, the obverse of each of the five coins features President George Washington. The coin has a mirror finish to the field and a matte finish on the raised portrait. The words UNITED STATES OF AMERICA and QUARTER DOLLAR are near the rim, while LIBERTY and IN GOD WE TRUST are in the field.

The reverse of each quarter commemorates a national park from a different state. The 2014 Quarter Proof Set includes Tennessee, Colorado, Virginia, Utah, and Florida.

The Tennessee quarter features Great Smoky Mountains National Park. A log cabin is set against the rising mountain range, and a hawk circles over it all. This park claims to be the most-visited national park in the nation, with about 9 million annual visitors! The inscriptions on the rim read GREAT SMOKY MOUNTAINS, TENNESSEE, 2014, and E PLURIBUS UNUM.

To honor Colorado, the design showcases a family at play at Great Sand Dunes National Park, which has the highest sand dunes in North America. The dunes tower in the background, while a father and son build a sandcastle in the foreground. The rim reads GREAT SAND DUNES, COLORADO, 2014, and E PLURIBUS UNUM.

Virginia’s contribution is Shenandoah National Park. A hiker pauses on a rocky bluff, taking in a view from Little Stony Man summit. Forty percent of Shenandoah National Park land is designated as a wilderness to preserve the animal and plant life in the area. The rim of the quarter reads SHENANDOAH, VIRGINIA, 2014, and E PLURIBUS UNUM.

Utah’s quarter shows the majesty of natural sculptures with Arches National Park. The world-famous Delicate Arch graces the reverse, rising out of the desert landscape in sharp contrast. These natural sandstone arches were formed over thousands of years through natural erosion. The rim of this coin reads ARCHES, UTAH, 2014, and E PLURIBUS UNUM.

Finally, Florida’s coin showcases the biodiversity of Everglades National Park. A heron stretches its wings, resting before it continues its hunt through this thriving marsh ecosystem. The marsh is actually an extremely slow-moving river, the water moving at speeds slower than one mile a day. This is depicted on the coin with beautiful mirror finish. The rim reads EVERGLADES, FLORIDA, 2014, and E PLURIBUS UNUM.

These are numismatic coins, containing 8.33% nickel, with the remaining weight coming from the copper core.

The set is sealed in a protective plastic case from the Mint, and ships inside a designed art box.

Pick up your 2014 America the Beautiful Quarter Proof Set today, and enjoy the rich history of the United States.

"I purchased this set as a gift for my niece, remembering how if when I was a young lad I had someone at that time to keep me interested in coin/ precious metals collecting how much better off I would be today. Turned out this set is far better than I ever could have expected and will be ordering more."