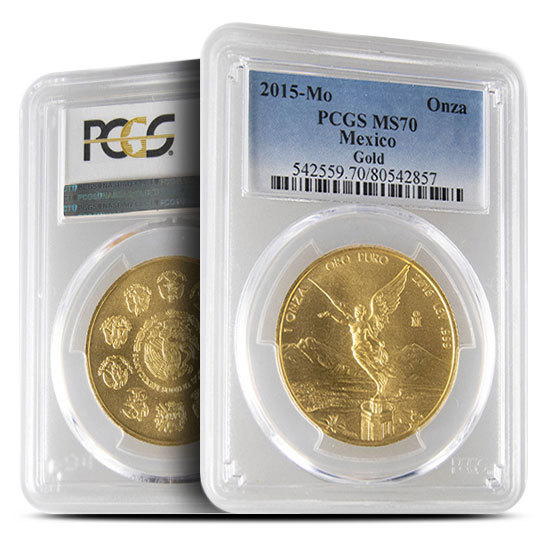 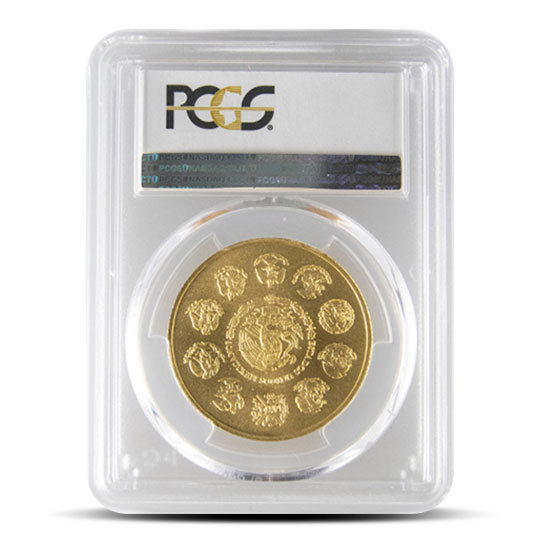 The historical design of the Mexican Libertad Gold coin ties back to the Centenario gold bullion coin, minted in 1921 to celebrate Mexicos 100th anniversary of its liberation from Spain. The original designs on the Centenario gold coin were chosen as the designs for the Libertad Coin series. Mexico continues to commemorate its freedom with the Libertad Gold Coin series. Right now, Provident Metals has the 2015 Mexican Libertad 1 oz Gold Coin available for purchase.

The Mint State 70 (MS70) certification from the Professional Coin Grading Service, PCGS, was awarded to this 2015 Mexican Libertad 1 oz Gold Coin. What this means is that the coin has its full, original mint luster. There are no traces of wear, handling, scratches, or contact with other coins. The purity of the gold content, the low mintage numbers, and this MS70 grading make these coins very difficult to find.

The obverse is graced with the current national Coat of Arms of Mexico. It features a Mexican golden eagle, perched atop a cactus with a snake hanging from its beak. In a semi-circle above the eagles head is the only inscription on the obverse – ESTADOS UNIDOS MEXICANOS. Beneath the eagle is the other half of the semi-circle, oak and laurel leaves. Encircling the outer edge of the coin are 10 past versions of the national Coat of Arms used throughout history.

The reverse is graced with Mexico Citys Winged Victory statue, or Angel of Independence. The statue celebrates Mexicos victory for independence from Spain. The background highlights the 2 Mexican volcanoes, Popocatepetl and Iztaccihuatl, who represent a princess and a warrior in a tragic love story in Aztec mythology. Inscriptions on the reverse are 1 ONZA, ORO PURA, 2015, and LEY .999.

The oldest working mint in North America – La Casa de Moneda de Mexico produces the Mexican Libertad Gold coins. The mint had a tough start with the gold series. In 1981, it produced 3 different weight coins – 1/4 oz, 1/2 oz, and 1 oz. However, the mint didnt produce any more gold coins until 1991. The mint then produced 1/20 oz and 1/10 oz coins in addition to the original 3 weights produced in 1981. These 5 weights were produced from 1991-1994, when production was halted again until 2000. After producing the 5 weights in 2000, the mint didnt produce any gold coins in 2001. Finally, in 2002, the mint started regularly producing the 5 weights of the Libertad Gold coins again. Mintage numbers for all 5 weights have been extremely low since the restart in 2002, even being as low as only 500 1 oz coins in 2003. All of the Libertad Gold coins are minted in .999 pure gold.

Should you have questions, please contact our Provident Metals Customer Service team, we will be happy to assist you. We can be reached via phone at 800-313-3315, online via our live chat, or via our email.