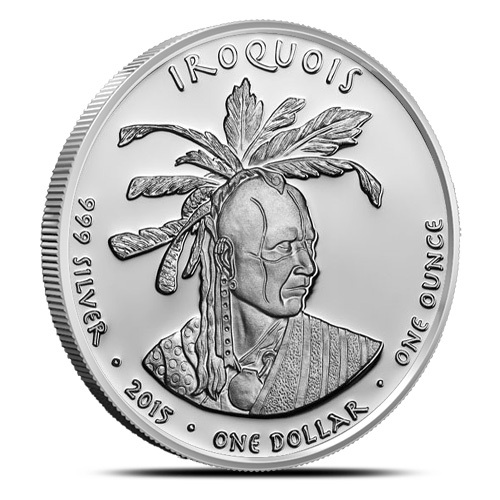 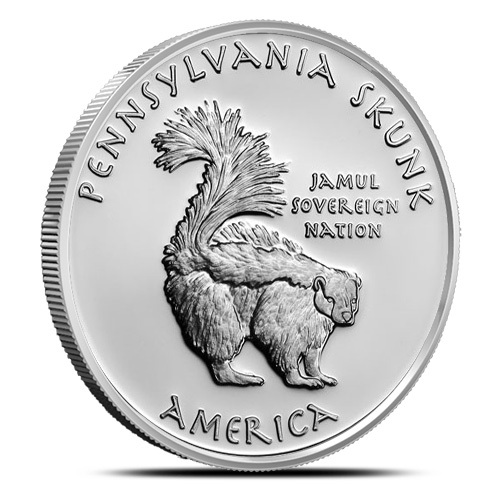 The Native American Mints series of Native Dollars pays tribute to some of the Native American tribes that helped to make this country what it is today. Each of the coins in the series features a tribe and an animal from the region the tribe lived in, or an animal that otherwise held special meaning to the tribe. The 2015 Proof Pennsylvania Iroquois Skunk 1 oz Silver Coin honors the Iroquois tribes. These feared and powerful people were found across the American Northeast. The coins contain 1 Troy oz of .999 pure silver and are valued by both the investor and the collector.

The Iroquois were originally known by the French as the Iroquois League. In later years, the British referred to them as the Five Nations. These tribes were historically known to be powerful and vital in the formation of what became known as the northeast Native American confederacy.

Around the American Revolution, the Iroquois tribe ultimately became known as the Six Nations. Their numbers included the peoples of the Mohawk, Onondaga, Oneida, Cayuga, Seneca, and Tuscarora tribes.

The tribe absorbed several other tribal groups over the history of the tribe. This was done either as the result of battle or due to becoming the shelter and new home for displayed nations. Today there are over 125,000 members of the Iroquois tribe, with some calling the United States home and others found living in Canada.

The obverse design of the 2015 Proof Pennsylvania Iroquois Skunk 1 oz Silver Coin features a detailed image of an Iroquois warrior. With a traditional headpiece and what looks like scars across his face, this warrior makes an imposing figure. Also included on the obverse of the coin are the name of the tribal nation, Iroquois and the purity, metal content, year of issue, value, and weight of the coin.

The reverse design of the 2015 Proof Pennsylvania Iroquois Skunk 1 oz Silver Coin features the depiction of a skunk. Also engraved on the coin is the name of the state, Pennsylvania and the word America. The striped skunk is well-known for his very familiar and noxious odor he releases from his scent glands when he feels threatened. Skunks are primarily nocturnal and enjoy living in a range of habitats, including forests and mountains.

The 2015 Proof Pennsylvania Iroquois Skunk 1 oz Silver Coin features a satin proof finish, which means it features a mirror finish, in lieu of a matte finish.

Are you ready to order your coin? If you have any questions about this beautifully designed coin from the Native American Mint, please feel free to call our customer service team at 1-800-313-3315. You can also email us or chat live with us through our website. We look forward to helping you make your purchasing choices.