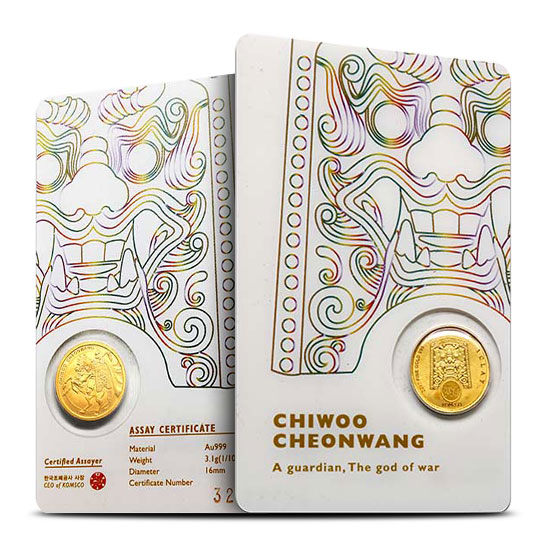 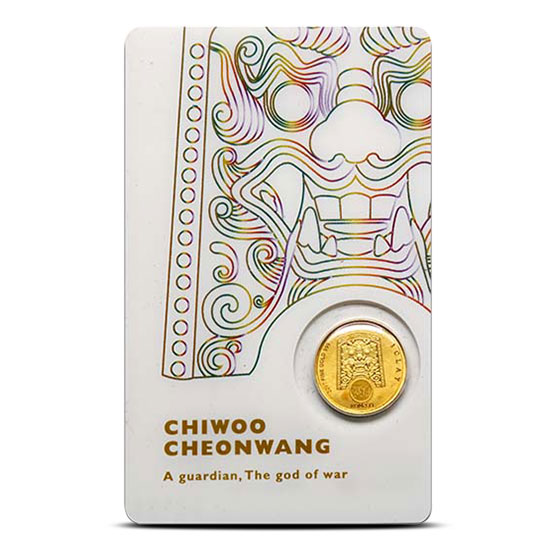 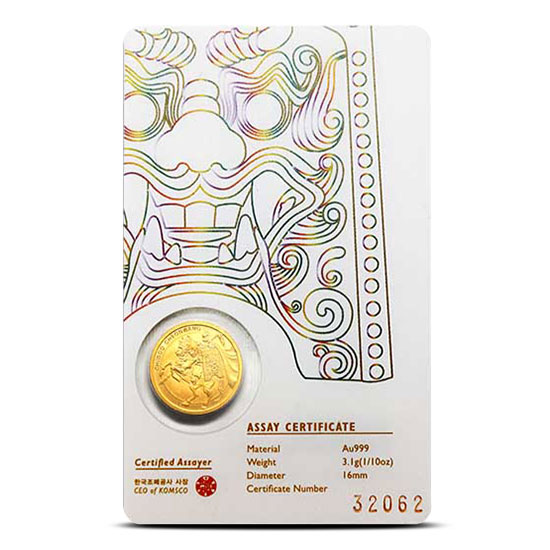 Out of Stock
Sorry! We're sold out right now.
NOTIFY ME
BUY BACK PRICE: $177.43
Add to WishlistLog In to add this product to your Wishlist

This medallion is a brand-new product from KOMSCO, Korea Minting and Security Printing Corporation, for 2017. These medallions come in assay cards of four different colors. The white assay card has the largest share of the overall mintage with 10,000 medals from the 25,000 medallions minted being placed in the white cards.

Both the obverse and reverse of the assay card has a colorful depiction of Chiwoo Cheonwangs shield, and the reverse also displays the assay certificate information.

The obverse of every 2017 South Korean Chiwoo Cheonwang 1/10 oz Gold Medallion shows the shield of Cheonwang. The shield shows the mask that he wore during battle. The engravings on the obverse include the nation of issue, KOMSCOs mark, a security image that includes the purity of the gold, and both the weight and metal content.

On the reverse side of the medallions, youll see the image of Chiwoo Cheonwang, the mythical God of War. In this depiction, Cheonwang is riding his warhorse with a shield in one hand and a spear in the other. This image is different than the reverse image of the 2016 debut medallion.

Chiwoo Cheonwang was an ancient military leader. He is now considered the God of War, because it is said that he had the ability to cast magical spells during battle and that he could control the weather both to benefit his military. Now, he is considered a symbol of the Red Devils, a group of fans of the South Korean National Soccer Team.

KOMSCO is the official government entity that is responsible for the productions of banknotes, circulation currency, and other government documents in South Korea.

At Provident Metals, we make the process of ordering precious metals simple. Online ordering is a quick, easy process, but we know that it isnt for all of our customers. For this reason, you can also order via phone with the help of our customer service representatives. To order by phone, call us at 800-313-3315. If you have any questions about the 2017 South Korean Chiwoo Cheonwang 1/10 oz Gold Medallions, contact us today.