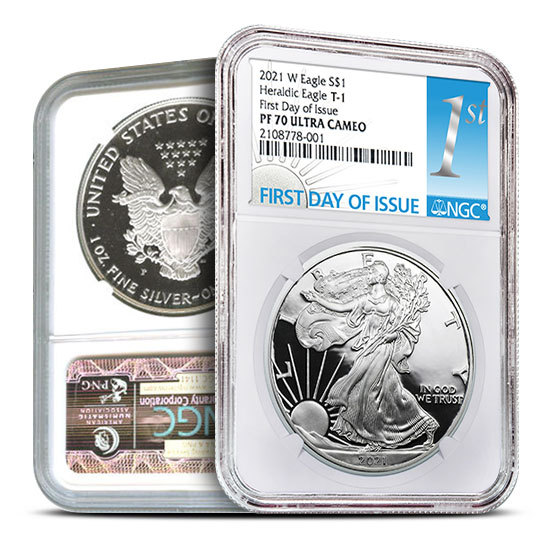 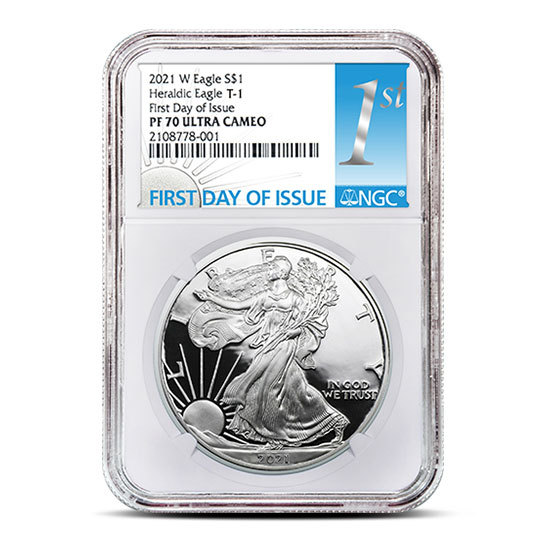 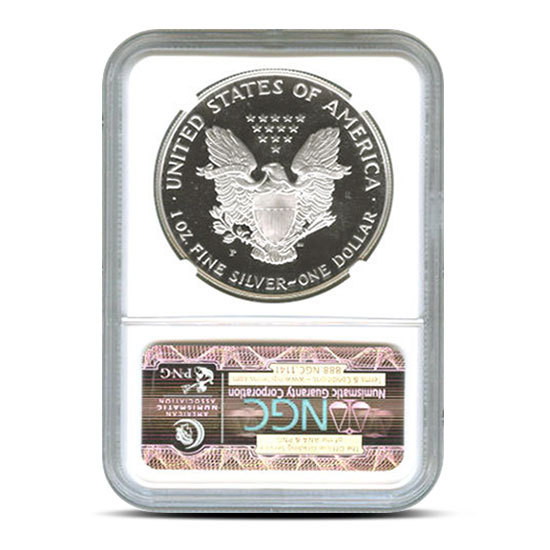 Since 1986, the United States Mint has issued the coins of the American Eagle Silver Series with the same designs. All BU and Proof coins from 1986, and Burnished coins from 2006, have featured Walking Liberty on the obverse and the Heraldic Eagle on the reverse. 2021 marks the 35th anniversary of the series, the final release of the heraldic eagle design, and the first-ever two-version issue. Provident Metals currently has perfect condition 2021-W Proof American Eagle 1 oz Silver Coins available to you for purchase online.

When you purchase a 2021-W Proof American Eagle 1 oz Silver Coin in this Provident Metals listing, you receive a coin that has earned three designations from the NGC. First and foremost, these coins are PF70 specimens that showcase full, original mint luster and come with no detracting flaws. The other labels are more unique.

A UCAM designation stands for ultra-cameo and is limited in use to proof coins. It indicates the presence of strong, frosted designs and deeply-mirrored, clear fields. The First Day of Issue, or FDOI, label notes that the coins were received for grading within 24 hours of the initial release date at the US Mint.

Walking Liberty is depicted in left-profile relief on the obverse of 2021-W Proof American Eagle 1 oz Silver Coins. This design was created in 1916 by Adolph A. Weinman and chosen by the US Mint in that same year to grace the obverse of the half dollar. It remained on the half dollar until 1947 and reappeared at the US Mint on these coins in 1986. The image features Liberty walking toward the sun on the horizon as it rises over a mountaintop. Liberty holds out her right hand, carries branches of oak and laurel, and has the American flag wrapped around her figure. Inscriptions read Liberty, In God We Trust, and 2021.

For the 35th anniversary of the series, the US Mint will eventually release 2021-dated coins with a new image of the American bald eagle on the reverse. The bird is shown swooping down toward its nest, which is not visible, with an oak branch in its talons.

Provident Metals customer service is available at 800-313-3315. Alternatively, you can chat with us live online or simply send us an email with your inquiries.