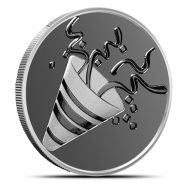 Any quantity available for $3.99 per round over spot!

Emojis are commonplace in pop culture right now, with millions of conversations in the United States alone taking place each day that consists largely of emojis. These simple little images have become popular ways to express emotions and interact digitally. As the Emoji Series continues, it’s time to party with the Emoji Party desi...Read More 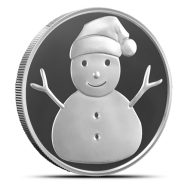 Any quantity available for $2.99 per oz over spot!

In the latest of the Emoji Series, another one of the most popular emojis comes to life in the physical world. While emojis are popularly used in digital communications to encapsulate thoughts or emotions in one image, you’ve got a new way to take in the vis...Read More 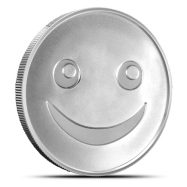 Any quantity available for $4.49 per oz over spot!

It didn’t take long after cell phones were introduced for text messaging to appear. Just as people were abandoning phone calls and face-to-face meetings in the office in favor of emails, the rise of ever-more-capable mobile phones allowed people to skip calling one another while on the go in favor of texting a quick message. The ri...Read More 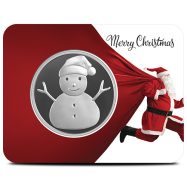 There are few activities in winter more enjoyable than building a snowman. The true beauty of building a snowman is that it can be done alone, with friends, or with your kids. On top of that, there’s no wrong way to build a snowman, making it even more fun to express your creativity. Provident Metals now has 1 oz Silver Emoji Snowman Rounds available to you for purchase ...Read More

Currently Out of Stock

This item is currently out of stock. Please click "Notify Me" below to be added to the in-stock notifications.

BUY BACK PRICE:Call Us

In the 21st century, most individuals with a smartphone are familiar with emojis. Even those who don’t regularly text are familiar with emojis, the small, popular symbols that people use to save time when texting or express emotions in a fun, visual manner. Today, there are more than 3,000 emojis available to smartphone users and some 900 million emojis are used on Facebook messenger alone in a given day. Learn about the Emoji Rounds available from Provident Metals.

Details on the Emoji Series

There are several designs planned in the new Emoji Round Series. While the collection starts with the popular Smiley Face design, one of the most ubiquitous emojis around, plans for the future could feature a wealth of other popular emoji images. Each round has 1 Troy oz of .999 pure silver, proof visuals that include frosted designs and mirrored fields, and the rounds will ship packaged either individually or by multiples. Individual rounds ship in plastic flips, while multiples of 20 ship in tubes.

Additionally, all of the rounds in this series have the same reverse design. Here, you will find various emoji designs cascading down the design field.

For the obverse design of the first round in the series, the 1 oz Silver Emoji Round, the designers feature one of the most popular emojis today. Here, you can see the common smiley face. The face has large, round, bright eyes and a wide smile on its face.

With the second release of the Emoji Series, the 1 oz Silver Snowman Round brings a fun-and-festive design. This image captures a playful image of the snowman as commonly found on mobile emoji keyboards. This snowman has a wide, round base with two coal buttons and twig arms. the circular head wears a Santa cap with a smile, button nose, and coal eyes.

In the third release of the Emoji Series, the design offers a jack-of-all-trades emoji. Whether you’re celebrating a birthday, anniversary, graduation, or any other moment worthy of a party, the new Party Emoji Round design is perfect. This design shows a conical shape with party streamers and confetti bursting outward to the edges of the design field.

The first release of emojis, as we know them today, came in 1999 when Shigetaka Kurita developed a set of 176 emojis. These emojis first appeared with NTT DOCOMO, a Japanese mobile phone company. Today, there are more than 3,000 emojis available on mobile devices, Facebook Messenger, and work platforms like Slack.

Start a New Collection with Emoji Rounds from Provident Metals

If you’re looking for a new collection of silver, the Emoji Round Series is a great option. Provident Metals’ customer service is available to assist you at 800-313-3315, online using our live chat, and via our email address. Feel free to visit our Payment Policies page for fast answers on payment methods.