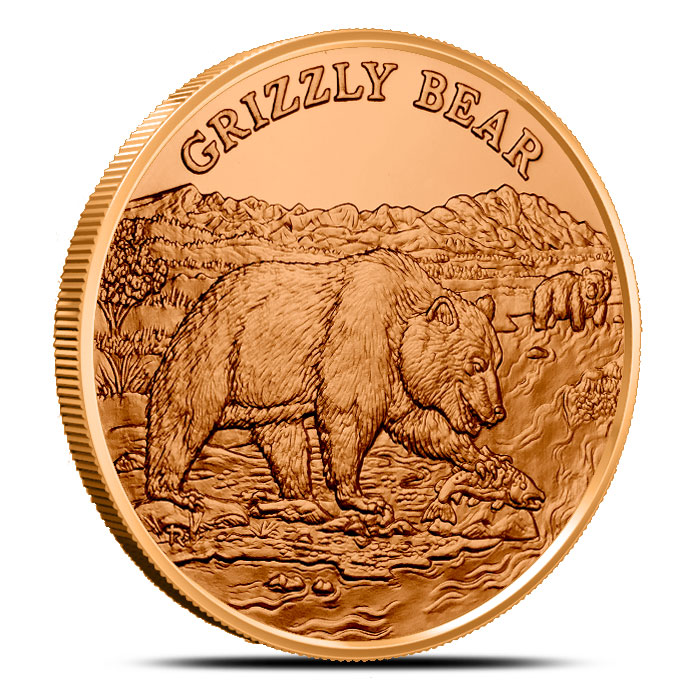 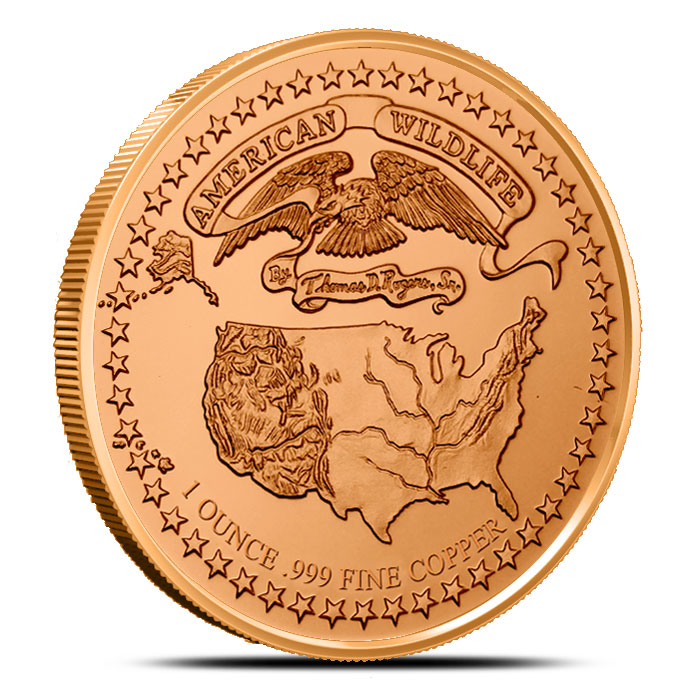 Grizzly Bear 1 oz Copper Rounds are manufactured at the Elemetal Mint with .999 fine copper. The one AVDP ounce rounds are featured in the 10-piece American Wildlife Series that was designed by former U.S. Mint sculptor and engraver, Thomas D. Rogers. Individual rounds and complete sets are now available exclusively at Provident Metals.

Snatching a fish from a stream, a stout grizzly bear stands along a riverbank as another bear looks on from a distance. The scene takes places along the beautiful terrain of the Denali (Mount McKinley) in Alaska. “GRIZZLY BEAR” is engraved above the bears.

Grizzly bears are agile for their large size – females can weigh up to 400 pounds, with males sometimes weighing up to 800 pounds. As omnivores, grizzlies aren’t particularly picky when it comes to their diet, eating fish, deer, berries, seeds, grass, dead animals, and much more.

Due to its abundance of food and water, grizzlies inhabit Canada, Alaska, and a variety of other Northern U.S. states. Grizzly bears feature prominently among the fauna of around Mount McKinley. The mountain range has a summit of 20,237 feet and is the third largest peak behind Mount Everest and Aconcagua in the Americas.

The common reverse of the series features the United States below a spread-winged bald eagle with a banner in its beak that reads “By Thomas D. Rogers, Sr.” “AMERICAN WILDLIFE SERIES” and the round’s weight and purity are also inscribed.

Rogers, the veteran sculptor/engraver, created each captivating obverse and reverse in the wildlife series. His extensive background includes designing various circulation coins during his 10-year stint with the United States Mint.

Individual Grizzly Bear 1 oz Copper Rounds will ship in coin flips in New Condition. Complete Sets may be purchased that include a silver and copper round of each design in a mint tube. Provident Metals is also offering Complete Silver Round Sets and Complete Copper Round sets in a full color display box that have been signed by Thomas Rogers, Sr.