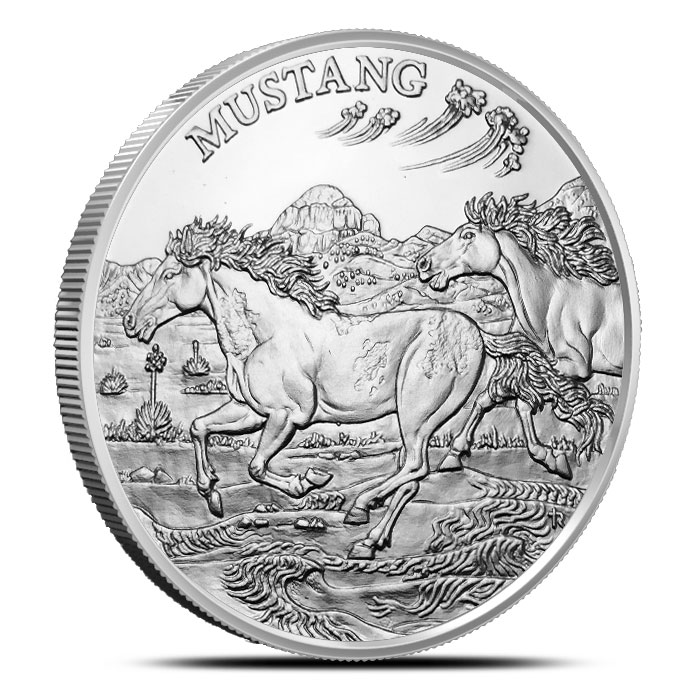 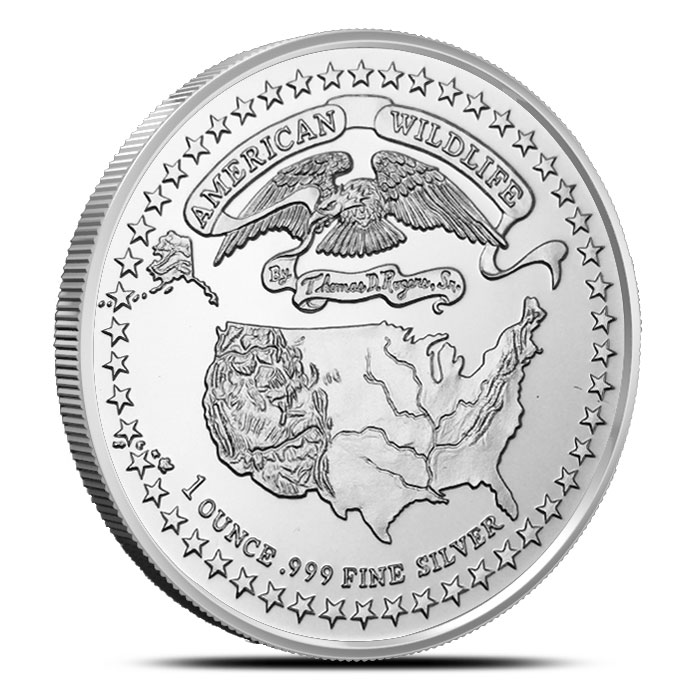 Buy the Mustang 1 oz Silver Round from Provident Metals and give your Silver Bullion collection a taste of the wild. This .999 fine silver round is one of 10 designs in the exclusive American Wildlife Series that was struck at the Elemetal Mint, an LBMA certified manufacturing facility, that uses the highest quality production standards to ensure the metal purity of each round.

Galloping across the planes of the surrounding Mustang Mountains in Arizona, two free-roaming Mustangs dart to the left as their manes flow in the breeze on the obverse of each one ounce silver round. “MUSTANG” is engraved atop the design.

Mustangs have been protected by U.S. law since 1959, when the horses were being hunted and abused. Protection of these animals increased with the introduction of the “Wild and Free-Roaming Horses and Burros Act” signed by President Richard Nixon in 1971, which facilitates the protection, management, and study of unclaimed horses.

These descendants of Spanish horses were brought to America in the 16th century, and have evolved ever since. Due to the mustangs’ size, speed, and stamina, they were favorites of pioneers on long journeys.

The Mustang Mountains are also featured on the obverse of this silver round. With their highest peak reaching 6,469 feet, this southeastern mountain range may be seen from Arizona’s Fort Huachuca and along the Whetstone Mountains.

The reverse carries a rendering of the United States under a spread-winged bald eagle that holds a banner reading “By Thomas D. Rogers, Sr.” The round’s weight and purity, along with “AMERICAN WILDLIFE SERIES,” are inscribed.

Each of these rounds was designed and sculpted by Thomas D. Rogers, a sculptor/engraver who spent 10 years at the U.S. Mint. Using his wealth of knowledge and experience, Rogers showcases many of America’s most beautiful animals and landscapes in exquisite detail.

Each Mustang 1 oz Silver Round will ship in new condition in a non-plasticized coin flip. The Complete American Wildlife Series may be purchased in a mint tube that holds a silver and copper round of each design. A Signed Silver Set and a Signed Copper Set may also be purchased in a full color display box signed by Tom Rogers. There are only 100 or each signed set available, so act now while supplies last.

The American Wildlife Series offers a two-fold benefit for Bullion collectors. First, because each of these Privately Minted Bullion rounds was manufactured at the LBMA approved Elemetal Mint each qualifies for a self directed Precious Metals IRA. Second, each design in this series has a limited mintage, which will increase the value of each round in the Silver Bullion and Copper Bullion secondary markets.

Whether you’re a horse and nature enthusiast or a silver bullion investor, you’ll want to pony up on Mustang 1 oz Silver Rounds – or the complete American Wildlife Series. Order yours online or by giving us a call today.

"Mintage low,nice round, one of three within series with lower mintage. "