1 oz Silver World of Dragons Series The Norse Round 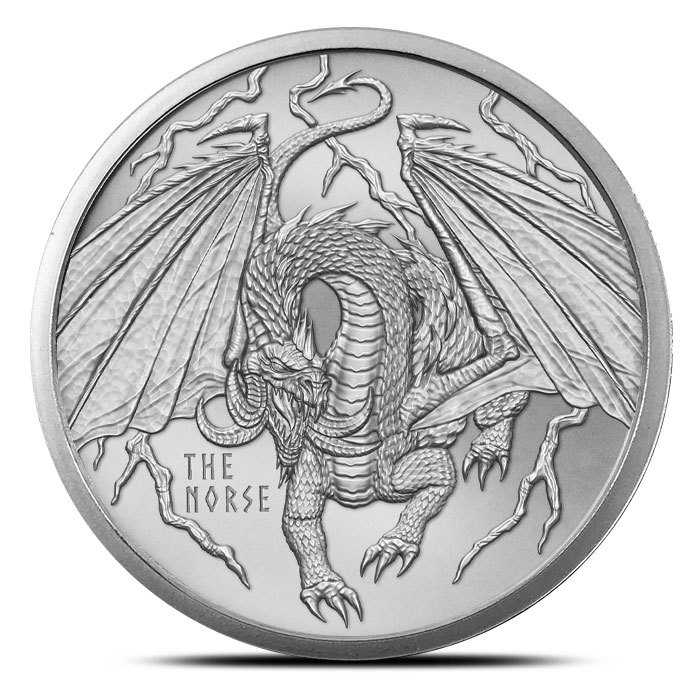 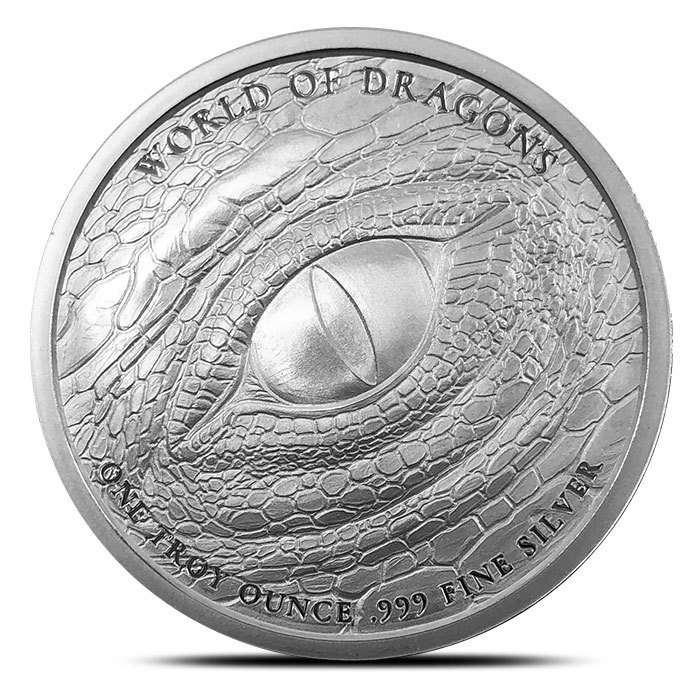 The fourth release in this exciting 6-design series celebrates the Norse Dragon. Part dragon and part serpent, the Norse dragon (also called Nidhogg) was a terrifying beast. Bright scales covered his body, knifelike claws adorned his feet, bat-like wings unfurled from his sides, and piercing horns erupted from his head. Bent on civilization’s destruction, Nidhogg lived in the darkest whirlpool of the underworld, gnawing at the sacred tree of life that held the nine Nordic worlds of the cosmos together.

Nidhogg has earned a special place in pop culture in recent years, inspiring dragon characters in several popular video games such as the World of Warcraft. And Marvel fans may remember in the film Captain America: The First Avenger that it is Nidhogg’s eye that forms the button found in a carving of the sacred tree, which is pushed to reveal the Tesseract. Now, we are thrilled to bring Nidhogg to life in silver and copper!

This limited edition 1 oz Silver The Norse Dragon round will be minted for an approximate 3-month period. So hurry and add the latest release in the series to your cart today, while they’re still available!

The obverse features the Norse Dragon’s scaly form as it prowls the underworld beneath the roots of the sacred tree of life. His gnashing teeth and massive claws are poised to destroy its roots and unravel the thread connecting the nine Nordic worlds. THE NORSE is also inscribed.

The reverse is common among all releases in the series. It depicts the powerful reptilian eye of the dragon. Its piercing gaze is surrounded by the inscriptions “World of Dragons” along with the metal content, weight, and purity.

Your 1 oz Silver The Norse Dragon round ships in brand new condition. Single rounds ship in an individual plastic flip. Multiples of 20 ship in mint-issued tubes, and multiples of 500 ship in sealed monster boxes.

9 Review(s)
Please or to write a review.

"Great coin. I have this either tied for best or just slightly under the Welch dragon. When I hear \"dragon\", this is what I imagine. The bad part of this is that these 2 were the best in series so there wasn\'t a strong finish to complete the set. "
Mike from - October 07, 2019

"Another Provident series I'm hooked on. Great rounds, exceptional detail. My only complaint is 6 series rounds don't fill a tube evenly. I prefer 4, 5, or 10 in a series."
Thomas from - September 12, 2019

"I have been collecting this series since its introduction, purchasing 10 rounds with each release. With the recent price of silver soaring (YAY!) I was a bit reluctant to bite the bullet and order these. However I did break down and ordered ten . Just received them yesterday, and as I was putting them into capsules I was struck by their detail and beauty. I think this is my favorite dragon in the series to date! I wouldn't hesitate to order a few of these for your collection!"
Robert from - September 10, 2019

"Love this series I never collected rounds before until I saw these detail is stunning, can not wait for the others to come out. Great way to start a collection"
Leon from - September 10, 2019

"This is a outstanding round . The piece is very impressive . It has a nice clean strike which enables the dragon details to really come out . Also the background has a proof like finish which also helps in projecting the image . A lot of times with a mirror like background you can spot small imperfections in the sheen of the piece . Not so in this collection all you see is the shine . As a matter fact it needs a warning don't open without sunglasses the glare may temporarily cause blindness . Also would like to thank the shipping department for handling & packing the round . First thing I do when I receive my silver I scope them out looking for any dings & scratches . Then I weigh it & wipe it off with a soft cloth . After that I put them in a cap never to come out again . In that process I always look for finger prints . If you see any then you know the shipper was not wearing gloves as they should . No prints on this bad boy . It's a five + star rating easily . Thanks Provident looking forward in receiving the next two . Have a blessed day . Peace ,Love & Happiness . Leon Tucker"
Laura J from - September 05, 2019

"Very nice coin. Artistic design with very fine detailing. Only one slight con. You need to look at coin closely to make out the head of the dragon. "
Joseph from - September 01, 2019

"Received these yesterday after having reserved 40 of both the Silver and Copper rounds. I un-boxed them last night and had a jaw-dropping moment. They looked really good here on the Provident Metals site, but in person I was shocked at the detailed art work. The more I rotated the round to see it from different angels, the more pleased I became with it. Great Job Provident for this series and awesome work on the part of Golden State Mint who struck the rounds."
Ken from - August 01, 2019

"I have not received this one yet but I have the rest of the series and I think I like this Norse one best so far. Wicked looking dragon!Thanks guys."