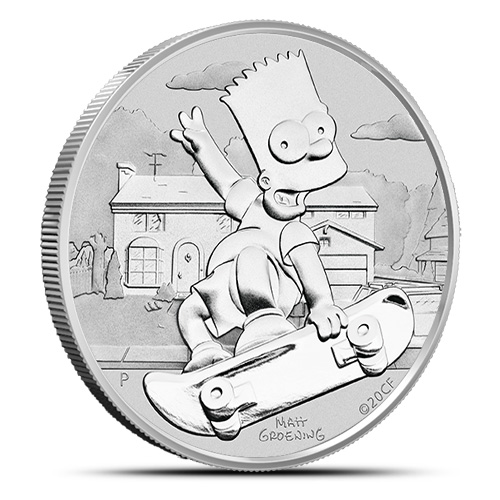 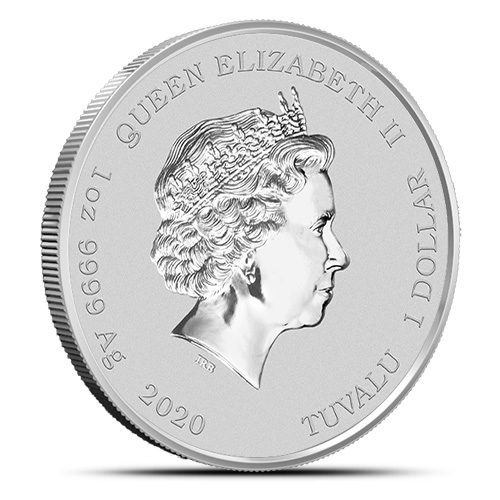 Out of Stock
Sorry! We're sold out right now.
NOTIFY ME
BUY BACK PRICE: $22.66
Add to WishlistLog In to add this product to your Wishlist

Bart Simpson is unquestionably one of the most popular characters in the animated series The Simpsons. A stalwart in the series since it debuted in 1987 as a 30-second animated skit on the Tracey Ullman Show, Bart was still popular with viewers when the 30-minute animated series on FOX debuted in 1989 with a renewed focus on the entire family. Today, you have the opportunity to get 2020 Tuvalu The Simpsons Bart 1 oz Silver Coins online at Provident Metals.

Matt Groening is the man behind the animated short that eventually became The Simpsons. While he named the other members of the Simpsons family, Homer, Marge, Lisa, and Maggie, based on members of his own family, he turned to an anagram to create the name for the eldest born child and only son. Bart is an anagram of brat, befitting the behavior and attitude of the young man.

Queen Elizabeth II is found on the obverse side of 2020 Tuvalu The Simpsons Bart 1 oz Silver Coins. This design was the fourth-generation image used on British coins from 1998 to 2015 and was designed by Ian Rank-Broadley. The popular design shows the Queen wearing a tiara believed to be her favorite among the many jewels she owns. Gifted to her grandmother Mary of Teck, the future Queen of England, upon her marriage to King George V, the tiara is known as the Girls of Great Britain and Ireland. Inscriptions read Queen Elizabeth II, 1 oz 9999 Ag, 2020, and Tuvalu.

Bart Simpsons rides his skateboard through the design element on the reverse of 2020 Tuvalu The Simpsons Bart Silver Coins. The Simpson family home is in the background with Marges station wagon visible pulling into the driveway behind Bart. The inscriptions on this face of the coin include the copyright symbol of 20th Century Fox, the creators name Matt Groening, and the P mint mark of the Perth Mint.

Set in the fictional American city of Springfield, the Simpson family follows the foibles and challenges of Homer, Marge, Bart, Lisa, and Maggie, as well as a cast of additional characters. Since 1989, the series has been translated into countless other languages and televised in a host of nations around the world.

These 2020 Tuvalu The Simpsons Bart 1 oz Silver Coins are available in Brilliant Uncirculated condition. Coins in this series come with protective plastic capsules for individual housing of the coins.

Please contact Provident Metals with any questions. Our team is available to you on the phone at 800-313-3315, online using our live chat, and using our email address.