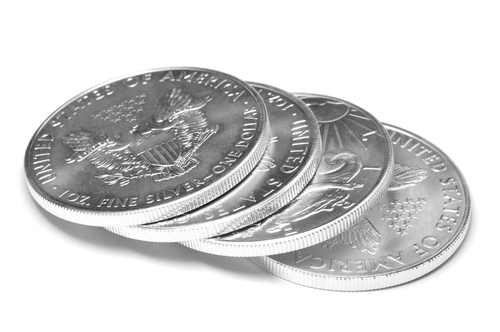 In 1965, President Lyndon B. Johnson signed the Coinage Act of 1965 into law, forever changing the way United States coinage would be made.

The Act was used to eliminate silver from the U.S. dime and quarters and lessen the percentage of silver used for the half dollar (dropping from 90% silver to 40%), and this law has been upheld ever since.

History of the Coinage Act

Events Leading Up to the Coinage Act

The beginning of the silver shortage dates back to the 1930’s. President Roosevelt signed the Silver Purchase Act of 1934, which prohibited private ownership of non-monetary silver in any amount that exceeded 500 troy ounces. If a person did privately own more than this amount, they were to surrender that amount to the government in exchange for a silver certificate.

In 1946, the Silver Purchase Act was passed which stated that the U.S. government would buy silver from domestic producers at a rate that was above equilibrium price while, at the same time, selling that silver at a fixed rate that was above market price. This arrangement helped the U.S. develop a sizeable silver reserve.

In the 1960’s, however, silver’s market price reached and surpassed the fixed threshold. This meant that individuals could purchase silver from the government for cheaper than market, which caused the silver reserve to sink rapidly with no signs of stopping. This meant that the price of silver certificates established in 1934 would soon be reached, and the consequences would include consumers purchas[ing] the certificates at face value, redeem[ing] them for silver, and sell[ing] the silver at profit.

Something had to be done.

Around 1959, the United States began seeing a coin shortage due to individuals hoarding away silver quarters, dimes, and half-dollars in the hopes of selling.

Coin shortages were not uncommon, and they were often short-lived with coin flow increasing again after a while. However, this particular shortage did not appear to be short-lived, as others had been in the past. The U.S. Mint decided to increase their production to meet the growing demand. Accompanying this coin shortage was an increase in the use of silver across the country.

Silver was not only being used in U.S. coins back then, but also used in industry. This caused the price of silver to skyrocket, and there was threat of bullion quarters surpassing the worth of quarters as money. This caused the hoarding of silver coins to become more popular. In fact, the Kennedy half dollar was soon driven from circulation due to its high collectable demand.

While the government did increase coin production, silver stocks plummeted, and it was clear the U.S. could not continue this rate of production. At the request of President Lyndon B. Johnson, Congress passed legislation that would address these problems by eradicating the silver from U.S. quarters and dimes and lessening the silver content of the half dollar from 90% to 40%.

President Johnson’s proposed bill passed through Congress easily, and Johnson was able to sign the bill into law on July 23, 1965. Quarters and dimes without silver began circulation at the end of that year.

In addition to removing silver, the Coinage Act of 1965 also banned mint marks in order to discourage the collection of silver coins based on the marks, although this was repealed in 1968. Secondly, proof and mint sets were halted from 1965-1967 as a result of the act. Instead, “special mint sets” were offered which had a better quality finish; however, their production was stopped in 1967.

While the mid-60’s were a changing time for U.S. coinage, investment value is not very high for coins minted during this time. In fact, many coins from this era are still circulated. Even the special mint sets from 1965-1967 are only worth between $5-7.

While silver can no longer be found in most of the United States’ currency, there are still plenty investment opportunities to be had. Check out our US silver coins and silver dollars for sale and learn how you can invest in collectable silver bullion.