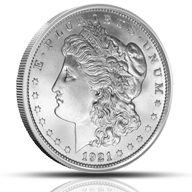 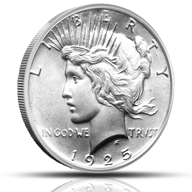 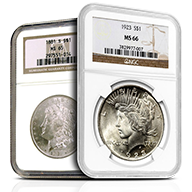 Peace and Morgan silver dollars are an inexpensive way to invest in American coinage history.

Provident Metals is proud to offer an outstanding selection of United States silver dollars, allowing our investors and collectors the flexibility of selecting from a variety of fine American silver coins. Some of our Morgan and Peace dollars are in brilliant, mint-state condition, some in near-mint condition, and still others in almost mint condition.

We have United States silver dollars in our collection that were issued as early as 1884 to as late as 1921, but all are produced with 90% Pure .7734 Troy Ounces of Silver. All of these coins represent a piece of American history and pride, and all were struck with great care by the United States Mint. They are all legal tender in the United States that can be used for the purchase of goods and services, but today, their value in silver bullion far outweighs their stated face values of one dollar. Morgan Dollars were minted from 1878 through 1904, and again in 1921 and replacing them, Peace Dollars were produced from 1921 through 1928, and again from 1934 through 1935. Both coins were produced at three mints including the following: Philadelphia (no mintmark), San Francisco (S), and Denver (D). Both are composed of .900 fine silver, yielding a total silver content of .77344 troy ounces per coin, and measures 38.1mm in diameter. By law, the Peace Dollar shared the same design requirements as its predecessor, the Morgan Dollar, and therefore, both feature a profile of Lady Liberty on the front of the coin and a unique eagle design on the reverse side.

Seldom has a coin inspired such public interest as the the United States Peace Dollar. Peace Dollars were produced at a time of great patriotism following World War I, and today, they are keepsakes of one of America’s greatest triumphs in the pursuit of liberty. They also hold the unique distinction of being the last silver dollar struck for general circulation in the United States. Following the year’s of deep and widespread sacrifice during World War I, Americans needed to honor her fallen heroes as well as celebrate her monumental victory. A groundswell began for the introduction of a new coin that would serve as a fitting memorial to the great war effort. In addition to the coin community’s advocacy for a new silver dollar, the U.S. Treasury Department was required to produce millions of new silver dollars to replace all the silver coins that had been melted in order to support the great war effort. A competition was announced for the design of the new Peace Dollar. An Italian sculptor named Anothony de Francisci won the competition and immediately began work on the Peace Dollar. Francisci’s inspiration for the obverse design of Lady Liberty was the profile of his beloved wife, Teresa de Francisci. With assistance from the chief engraver at the U.S. Mint, Francisco redesigned the reverse of the coin to show an eagle clutching an olive branch sitting atop a rock upon which is written a single word: Peace. The Peace Dollar was an immediate and resounding success with the public and began selling out at various locations around the country.

The design of the Morgan Silver dollar served as the inspiration for the Peace Dollar. Its origins can be traced to the largest silver strike in history, the Comstock Lode. As a result of a glut of silver due to this massive silver strike, by 1877 pressure for government intervention to stabalize the price of silver eached a fever pitch. Therefore, in 1878, Congress responded to public pressure for intervention with the Bland-Allison Act. This act required the U.S. Treasury Department to purchase large amounts of silver for the production of coins. The treasury purchased silver at the astounding rate of two to four million troy ounces per month. Hence, the first Morgan Silver Dollar was minted toward the end of 1878. The Morgan Silver Dollar takes its name from its designer, the British engraver George T. Morgan. So respected were his coin designs that he eventually became the U.S. MInt’s seventh chief engraver in 1917. For the representation of Lady Liberty, Morgan was eager to depict the profile of an American woman rather than the more common Greek-style representation. Morgan’s friend and artist, Thomas Eakins referred Morgan to Anna Willess, a Philidelphia school teacher, who agreed to serve as the model for Morgan’s Lady Liberty. Morgan declared William’s profile to be the most perfect he had ever seen, and he thereafter began his most important life’s work with this engraving. On the front of the Morgan dollar, Morgan’s Lady Liberty can be seen in profile with her hair cascading in curls down the back, held in place by a band engraved appropriately with the word LIBERTY. The Latin motto, E PLURIBUS UNIM (from one many) is featured prominently across the top of the coin with thirteen stars representing each of the original thirteen colonies bordering the bottom of the coin. The reverse, or back of the coins, displays a heraldic eagle holding the traditional American symbols of strength and peace. The eagle holds a clutch of arrows and an olive branch in his talons.

Because of thier fine silver content, their place in American history, and their classic artistry, both the Morgan and Peace Silver dollars are coins that will be a treasured addition to your fine silver collection! Provident Metals offers many years and issues to choose from, and our on-line ordering system will ensure both a swift and secure delivery of your historic Silver Dollars. Select as many issues as you see fit, and build an impressive collection of these outstanding U.S. coins.