Precious metals are not only used as currency. In today’s world, metals like gold, silver, and platinum are used for anything from electronics to medical technologies. Here are some of the most common modern uses for precious metals. 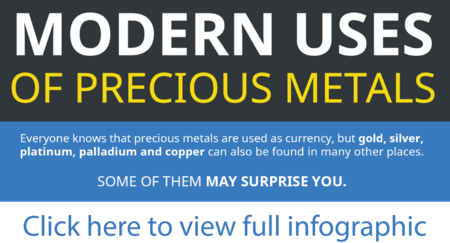 The word “gold” is synonymous with status and stature, and has been throughout history. Gold’s variability as an element makes it highly valuable. Gold is frequently sought after for not only its aesthetic appeal but also its industrial value due to its unique qualities. Gold is pliable, conducts electricity, and easily merged with other metals.

The most common uses for gold in the modern day include:

Silver is a unique metal, but it is less rare and expensive than gold. For centuries silver has been used in both jewelry and coins; however, modern science has also discovered numerous uses for its properties and has applied it to many modern day advancements. Today, silver is commonly used for:

Platinum is widely considered the most practical of the precious metals, and it has been used industrially since the time of the ancient Egyptians for fashioning fine items. Platinum remains a popular fine metal choice to this day, and some of platinum’s many uses include:

The first record of copper use dates to around 8000 B.C. and copper was used for tools as early as 5500 B.C. Today, copper continues to be a valuable metal in many areas of modern life. Some of copper’s modern uses include:

While there are numerous modern uses for precious metals, classics like coinage are still popular. If you’d like to make a gold, silver, copper, or other precious metal coin your next investment, feel free to browse our online inventory.