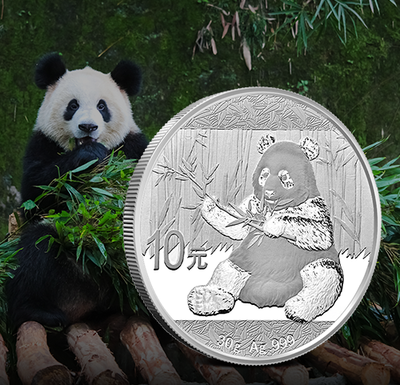 Chinese Silver Pandas, which feature the adorable bear endemic to the region, are a popular choice among investors and collectors of international bullion coins. The history of the Silver Panda has inconsistent beginnings, but it has since settled into a position of worldwide acclaim as high-quality and beautifully designed silver bullion.

The obverse of the Silver Panda is redesigned each year, but always features a panda bear. The panda is generally depicted in its natural habitat among a forest of bamboo shoots. It is worth noting that the Chinese panda is also available as a gold coin.

The Taoist Temple of Heaven of Beijing stands on the Silver Panda’s reverse. This temple was completed in 1420 during the Ming Dynasty. Its main purpose was to provide a sanctuary for Chinese royalty and other elites to worship. While the panda on the obverse has changed many times, the Temple design has largely remained the same (with only a slight alteration in 1987 to accommodate a weight and purity change in the coin).

In 1987, the weight and purity of Silver Pandas were adjusted to meet customer demand and expectations. For many years from 1987, each Panda weighed one troy ounce and consisted of .999 fine silver. No Silver Pandas were produced in 1988. The lack of production in 1986 and 1988 is likely attributed to the mint focusing on other products with a higher priority at the time.

In 1989, Silver Pandas with a BU finish were released. It was also this year that a “P” was placed on the obverse of proof Silver Pandas.

By the mid-1990s, Silver Pandas began getting a new panda design each year. This greatly pleased many collectors who wanted to add each loveable bear to their bullion portfolios. However, the Chinese Mint kept the same panda design for two consecutive years in 2001 and 2002. After protests from loyal consumers, new annual panda designs resumed in 2003 and continue to this day.

In 2016, Silver Pandas were switched from troy ounces to grams because the metric system appealed to more international consumers. While not exactly the same weight, the one troy ounce Panda was replaced by the 30 gram Panda.

From the Silver Panda’s debut until 1989, the coins were manufactured solely in Shanghai. As the coins grew more popular, it was clear that the mintage quantities had to be increased. In 1990, Silver Pandas were minted in both Shanghai and Shenyang. A third minting location of Shenzhen was added in 1999. Silver Pandas are now minted in Beijing as well, marking four regular minting locations across the country.

Chinese Silver Pandas do not carry mintmarks even though there are multiple mint locations. Having these coins produced at various mints sometimes results in slight variations on the coins, which instantly become treasures for collectors.

Silver Pandas are minted in relatively low quantities each year, especially when compared to the Chinese population as a whole. Granted, not all Chinese citizens will buy Silver Pandas, so plenty are sold abroad. If you intend to invest in Silver Pandas, don’t miss your chance to own each year’s unique design. The iconic bears have captured the hearts of many, while providing immense value to your precious metals portfolio.

Why Should I Invest in the Silver Panda?

The Chinese silver Panda is now one of the most coveted coins among silver bullion investors and coin enthusiasts. Because each coin consists of .999 fine silver, and is minted and guaranteed by a sovereign government, the Silver Panda may be included in a self-directed precious metals IRA.