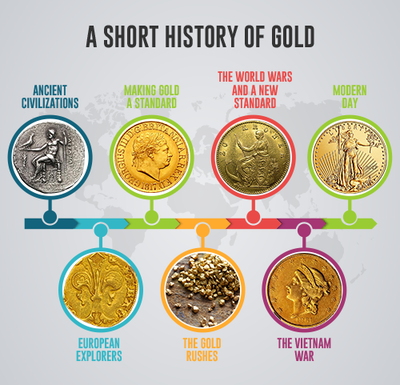 Gold has held a position of status and awe since the beginning of human civilization, and the metal’s influence on history is unparalleled. It has inspired wars, provided wealth, and shaped the course of human history.

Here is a brief history of gold and the ways that it has been valuable to humans for thousands of years.

Archaeologists cannot pinpoint an exact moment in human history when gold was discovered, but traces have been found in ancient caves dating back to 40,000 BC. Gold proved to be a popular metal to ancient peoples due to the natural, malleable state in which it is found in nature.

The first solid evidence archeologists have of human interaction with gold comes from the ancient Egyptians in roughly 3,000 BC. The metal was not only a status of wealth, but was also an important part of Egyptian mythology and daily life.

Everything from jewelry to the capstones of the Great Pyramids to King Tut’s funeral mask was crafted from gold. The Egyptians also created detailed maps providing information on where to find gold mines and the best gold deposits from around the kingdom.

The Egyptians were responsible for numerous “firsts” in the area of gold advancement. They were the first humans to smelt gold, craft from it, and alloy the metal with others for various purposes. Additionally, the Egyptians formulated the first gold ratio as pertaining to the metal’s value: one gold piece was equal to two and a half silver pieces. Gold was, however, never used as bartering material for the Egyptians; they opted for agricultural products and other goods.

It was not until the Lydians that gold was used as coinage and currency in 564 BC. The Kingdom of Lydia, located in what is now western Turkey, was the first nation to use gold and its alloys to create and use as a system of trade.

Later, the ancient Greeks also used gold as a form of currency and a sign of status and wealth across their nation. Gold, they believed, was associated with the numerous gods and demigods of their culture. A mortal who possessed gold, therefore, possessed wealth and a higher social status.

While most Greeks coins were made from silver, gold was also used on occasion. Greek coins often featured depictions from mythology, as well as local animals or plants.

While the Romans were by no means the first to use gold in their coins, they were the first to make gold coins a widespread currency. Before their time, gold coins were far less common than coins made of other metals. This is because there had never been a supply of gold large enough to warrant this expansion. Gold was also less of a status symbol in Roman culture, cutting back on the use of gold for elaborate ornamentation.

Additionally, the Romans developed a new means of gold extraction through hydraulic mining. This, in addition to their conquest of other nations, contributed to their abundant gold possession.

European exploration of the Americas also played a huge part in the history of gold. According to early explorers, Native Americans possessed lavish gold ornaments and other tokens, namely in many regions throughout Central and South America.

Around the 14th century, King Ferdinand of Spain sent explorers out to discover the New World to the west and find as much of this reported gold as they could. Conquistadors soon destroyed both the Inca and Aztec civilizations in their quest for gold.

The success of the Spanish conquistadors in South America fueled other explorers to reach North America hoping for similar results; however, the people of North America did not see gold in amounts comparable to that in South America. Flint, slate, and other minerals were considered more valuable, and gold was rarely used.

Great Britain was the first country to create a gold standard: a fixed currency value for gold based on weight. Other countries, including the United States, were quick to follow suit.

The United States passed its Mint and Coinage Act in 1792, which shared a fixed price for gold in US dollars. With this, gold and silver became legal currency for the United States. Until the time of the Civil War, gold hovered around 15 times more valuable than silver.

The discovery of large gold deposits in western North America spurred numerous gold rushes in the 1800s. Gold was often found in rivers, and prospectors could use simple, inexpensive tools to mine for their riches.

California and the Yukon Territory in Canada saw people coming in from all over the world in hopes of striking it rich. In fact, the population of San Francisco swelled from around 1,000 to 25,000 in two years. These prospectors caused the gold production in North America to skyrocket, and fueled the need to build a new branch of the US Mint in San Francisco.

The World Wars and a New Standard

The two World Wars brought destruction to much of the world. Gold production decreased during this time, and many mines were closed.

In 1944, allied power leaders saw the need to meet in order to figure out the financial order after the World Wars had ended. A conference was held in Bretton Woods, New Hampshire where it was decided that a gold exchange standard would be created in which gold prices would be fixed to the US dollar. This meant that all other nations would fix their gold exchange rates based on the dollar.

The United States was ultimately chosen due to its strong economy emerging from the World Wars, and the decision to peg gold prices to the US dollar ultimately helped the United States come into the global superpower role it knows today. The fixed gold price was set at $35 per ounce of gold.

During the Vietnam War in the 1960s and 70s, the gold standard was brought to an end. America’s budget was ruined, and President Nixon decided to nullify the Bretton Woods Agreement made after the World Wars.

Several attempts were made to recover the gold standard, but the price of gold continued to rise too high. Because of this, most gold pricing charts begin somewhere in the 1970s when gold pricing began to vary significantly.

When Bretton Woods ended in 1971, using gold as an investment became more popular, and the price has been anything but steady since then. With the US invasion of Iraq and the economic crisis of 2008, gold prices have reached their fair share of highs and lows, but has hovered between $1,200 and $1,400 an ounce since around 2011.

Additionally, no country in the world currently uses a gold standard to back their currency. Most countries contain their gold in large reserves.

While gold is still used to produce coins, jewelry, medals, and other tokens, modern science has discovered numerous other uses across various industries. Gold is used in numerous electronic devices including computers, cell phones, and televisions. Additionally, gold is used to create dental appliances, for certain medical treatments, and for aerospace mechanics.

If you are looking to make the world’s oldest metal your next investment, Provident Metals has the latest gold bullion, coins, and bars to suit your desires. We also offer up-to-the-minute gold spot prices to make your buying decisions as easy as possible.