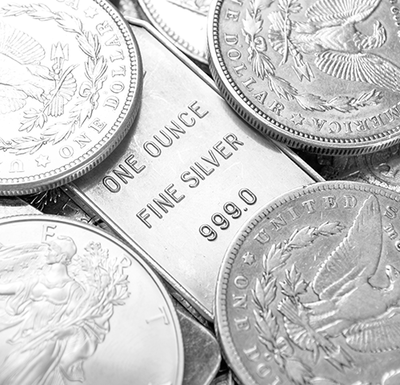 Silver has been an important part of human culture for thousands of years, and the value it presented back then is still present in the modern day.

Take a look at where our fascination with silver began and how we use this precious metal today.

Many believe that silver mining first began around 3000 B.C. in Anatolia, presently known as Turkey. These first silver mines were used to provide silver supply for craftsmen in Crete, Greece, and other cultures in the surrounding areas. Silver was a popular metal due to its malleability, resistance to corrosion, rarity, and beautiful luster.

These early miners soon discovered a way to extract silver from commonly found silver-lead ores, a process known as the “cupellation” process. Lead poisoning became a serious problem for many miners during this period.

The center of silver production moved into Greece’s Laurium mines (near Athens) around 1200 B.C. and continued to provide silver for Greek society. These Laurium mines were very productive, and the silver trade throughout Asia Minor and Africa began to grow rapidly.

Estimates from ancient writings and evidence found around the old mines suggest that the Laurium mines could have produced roughly 1 million troy ounces every year. Additionally, up until around 100 A.D., Laurium mines were the largest source of silver production in the world.

After 100 A.D., the center of silver production moved to Spain. Spain provided silver to the Roman Empire, and Spanish silver proved to be a hot commodity on the Asian spice trade routes. Demand for that silver, however, was so high that production was supplemented by Italy, Greece, and other areas in the Roman Empire.

After the Moorish conquest of Spain in the 8th century, silver production broadened to include areas of Central and Eastern Europe. The production of silver did not increase vastly over these years; however, the discovery of the New World in the West would soon prove pivotal.

Silver in the New World

Spanish settlers discovered more than just new lands and cultures when they came to the Americas in the late 1490’s - they also discovered vast silver deposits.

While gold was also a highly desired New World commodity, the amount of silver discovered in areas of Bolivia, Mexico and Peru far surpassed the amount of gold found: roughly 7,440 tons, in fact! From about 1500-1800 A.D., these areas of Central America provided around 85 percent of the world’s trade and production of silver while Central Europe largely provided the rest.

In the mid-19th century, other countries began to discover ample silver on their lands – particularly the United States. The Comstock Lode was discovered in Nevada during this time as well as other regions in Colorado and Utah. Because of these discoveries, silver production exploded yet again. By the 1870’s, between 40 and 80 million troy ounces of silver were produced each year and that number doubled by the 1920’s.

Advancements in technology also aided with silver’s production rise. Techniques like “fuming” (removing silver from zinc ores), steam-assisted drilling , and the ability to mass-mine allowed silver to be harvested in much higher volumes than was previously possible.

The 20th century brought the end of the gold standard and the decision to end silver coinage in the United States. That is hardly the end of the story though. In the last few decades, silver has been used more in uncirculated bullion coins, and technology; production has certainly not ceased.

Over the centuries and civilizations, silver has had a wide number of uses that far exceed jewelry. Here are a few of silver’s most popular modern uses.

Silver was first used for coins by the Lydians around 600 B.C. Since silver is considered less valuable than gold, silver was used to make coins of a lower denomination that could be used to pay for everyday transactions. Because of this, silver is the most widely used material for coin-making ever.

While silver is rarely used for currency today, silver coins are still created as collectors’ items and investment pieces. Mints all over the world use fine silver to create highly valuable coins that are considered works of art and important investment pieces.

Silver is used widely within various industries. Silver is considered the best electrical conductor of all metals, and is used in numerous consumer products for that reason. These products include cell phones, computers, automobile semiconductors, etc.

Since silver is a great conductor of heat, it is used to create spacecraft solar radiation tiles which protect astronauts when reentering Earth’s atmosphere.

If you are looking to make one of civilization’s oldest and most useful precious metals one of your next investments, Provident Metals has all of the options you need. Browse our silver selection to discover beautiful coins, bars, rounds and specialty silver pieces.