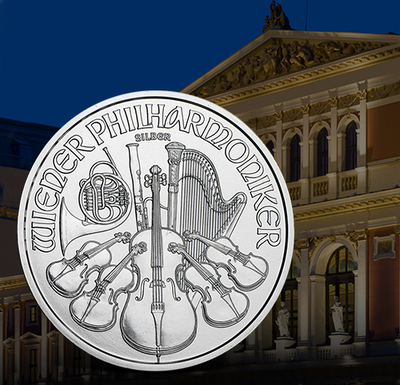 The popularity of Austrian Silver Philharmonics has boomed since their creation in 2008, earning them a status of being the top selling silver bullion coin in Europe. Tens of millions of Silver Philharmonics are manufactured each year and purchased by investors and collectors around the world. They are also the only bullion coin denominated in euros, though they are only considered legal tender in Austria.

The images on the Silver Philharmonic—designed by Austrian Mint Chief Engraver Thomas Pesendorfer in 1989—celebrate the nation’s rich history of musical culture. On the obverse, you will see the Great Organ from one of Austria’s famed concert halls, The Golden Hall.

An array of orchestral instruments is presented on the reverse, including a french horn, bassoon, harp, cello, and four violins. The inscriptions on both sides of the coin are written in German, the official language of Austria.

About the Austrian Mint

The foundation for the establishment that would come to be known as the Austrian Mint was laid in 1194 when Richard the Lionheart paid 12 tons of silver to Duke Leopold V to buy his freedom from a year of incarceration. The Duke then used that silver to strike coins. This unofficially kickstarted the 800 year minting history in Vienna, though the Vienna Mint was not mentioned in historical documents until 200 years later.

The original location of the Vienna Mint was near Hoher Merkt, and later branched out to several locations around Vienna and throughout Austria. In 1918, the nation consolidated coin striking into a single minting facility called the Vienna Principal Mint. The name was officially changed to the Austrian Mint in 1989, and the mint became a subsidiary of the Austrian National Bank. The mint is now the sole manufacturer of Austrian coinage.

The Role of the Silver Philharmonic

The Austrian Silver Philharmonic debuted on February 1, 2008, following the success of the Gold Philharmonic that was first released in October of 1989. A Platinum Philharmonic was added to the series in 2016. Tens of million of Philharmonic bullion coins are produced each year, with exact mintage numbers changing according to demand.

The Philharmonic series has become one of Austria’s most recognized coins, along with the Maria Theresa silver coin. Philharmonics have reached international popularity, playing a vital role in establishing the success of the Austrian Mint.

You can join the individuals who enjoy collecting Silver Harmonics. Simply browse Provident’s selection of Philharmonic coins and choose the one that fits your portfolio and budget. These beautiful coins provide immense value that your family can benefit from for years to come.