Cattle of Geryon 1 oz Silver | The 12 Labors of Hercules 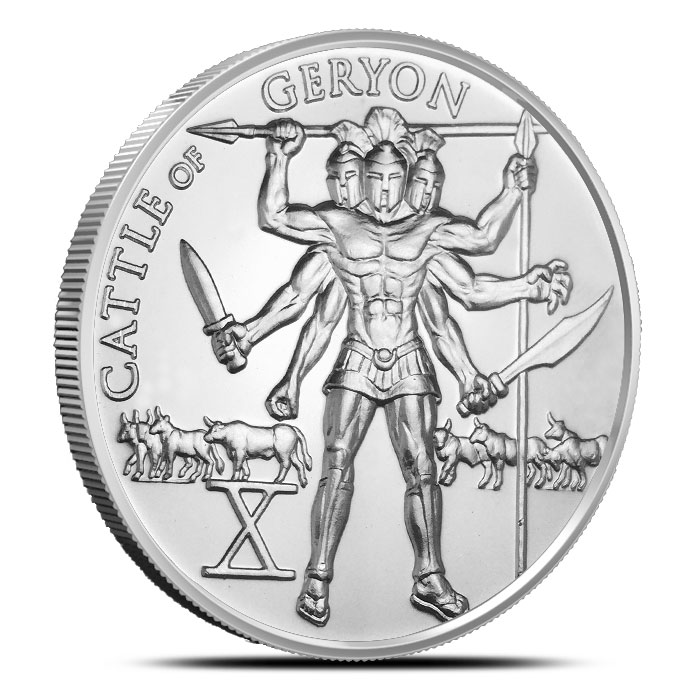 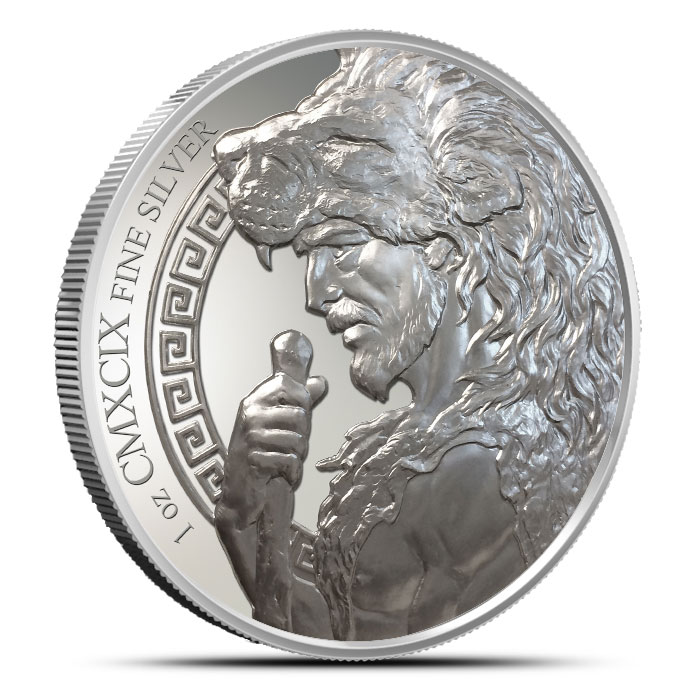 Buy the 10th release in Provident Metals exclusive 12 Labors of Hercules series, the Cattle of Geryon 1 oz Silver Round. Each Cattle of Geryon round consists of .999 fine silver and was manufactured at the ISO9001 certified Provident Mint, which employs rigid quality standards to ensure each round is of the highest silver purity.

Hercules’ 10th labor was one of his most difficult; he was tasked by King Eurystheus to travel to the island of Erytheia to seize the Cattle of Geryon. The scorching temperatures during his trek through the desert frustrated Hercules so much he shot an arrow at the sun. Helios, the sun god, recognized his efforts and gave the Greek demigod a golden chariot to ease his journey.

Upon arrival to Erytheia, a two-headed dog and a herdsman attacked Hercules, but a single strike with his wooden club disposed of each. Geryon, a monster with three helmets, three spears and six arms, heard the ruckus and charged at Hercules. Using one of his poisoned arrows, Hercules shot with such power that it penetrated Geryon’s helmet and killed the beast.

The cattle were rounded up and herded back to Eurystheus, but not without trouble. Some cattle were stolen, and others scattered after Hera sent a gadfly (a tormenting insect) to bite and aggravate the cattle. Hercules rounded up the herd within the year, but Hera flooded a river to further delay the demigod. Hercules countered by piling rocks to make the river more shallow so the cattle could cross. Finally, when Hercules delivered the cattle to Eurystheus, the King sacrificed the animals to Hera.

Geryon, the brute giant, is featured on the obverse of each 1 oz silver round. He is clutching two spears and two swords in his six muscular arms while wearing three helmets. His cattle roam in the background. “CATTLE OF GERYON” and “X” are inscribed.

The reverse of this 1 oz silver round carries a portrait of Hercules. The Nemean Lion’s skin is draped over his head as armor, and he holds his wooden club in his right hand. The inscription reads “1 oz CMXCIX FINE SILVER.”

Individual Cattle of Geryon silver rounds will ship in Plastic Flips in mint fresh condition. Rolls of 20 will be shipped in plastic tubes and multiples of 500 will ship in a strapped Provident Metals Green Monster Box.

As a valuable addition to your Silver Bullion holdings, this 1 oz Cattle of Geryon is a crucial piece to all 12 Labors of Hercules collections. Make sure to purchase your round between June 12 and July 12, 2015, as the round will only be available for one month. 39mm Air-Tites are also available to properly protect your rounds.

Buy Cattle of Geryon 1 oz Silver Rounds – without the trials that Hercules endured – only at Provident Metals. Take advantage of our online purchasing system or give us a call today.