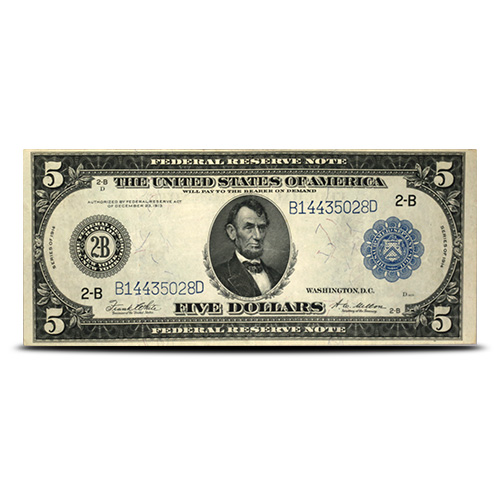 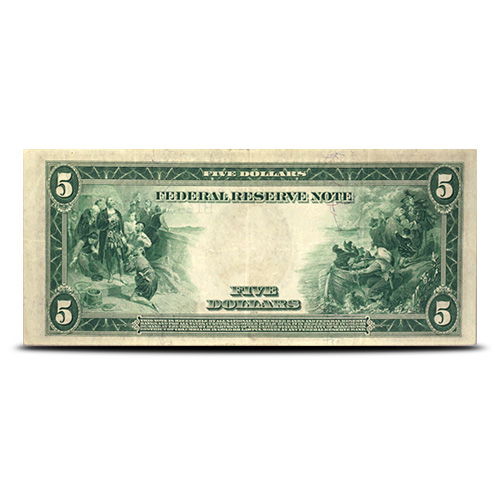 The paper money issued to Americans in the 21st century was first introduced in 1914. Known as the 1914 Series, this first release of the Federal Reserve Note included five of the seven current denominations still in circulation today. Though the designs have been modernized, several of the notes retain the same visuals on at least one side as the original issue dates. Today, you have the chance to get 1914 $5 Federal Reserve Notes in Very Fine condition online from Provident Metals.

On the obverse side of the 1914 $5 Federal Reserve Note is a bust of President Abraham Lincoln. The 16th Commander-in-Chief, President Lincoln delivered the Gettysburg Address and Emancipation Proclamation among his notable speeches and announcements during his presidency. He is, of course, well-known for leading the Union during the Civil War. 1914 Series $5 Federal Reserve Notes feature either red or blue ink on the serial numbers and US Treasury seals.

The reverse field of 1914 $5 Federal Reserve Notes features a design that was only used through 1927. These notes were issued with two artistic murals on either side of the blank central field. On the left side, Christopher Columbus and his explorers take their first steps in the New World. On the right side of the bill, the Pilgrims row ashore in Massachusetts nearly a century-and-a-half later.

1914 $5 Federal Reserve Notes in Very Fine condition retain much, if not all, of the original crispness. The notes may have folds, creases, and wrinkles, but otherwise have only the slightest flaws not easily visible to the naked eye.

Provident Metals can assist you with any questions. Our customer service team is available at 800-313-3315, online using our live chat, and through our email address.