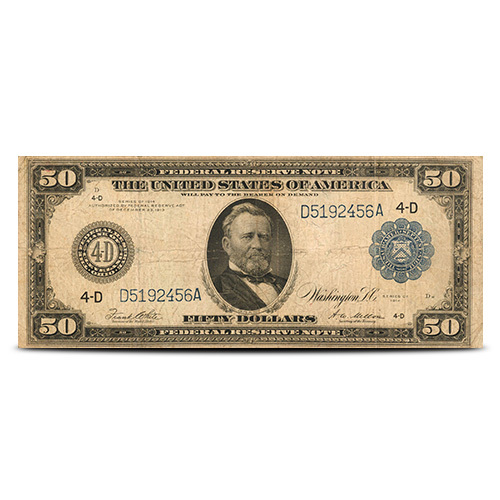 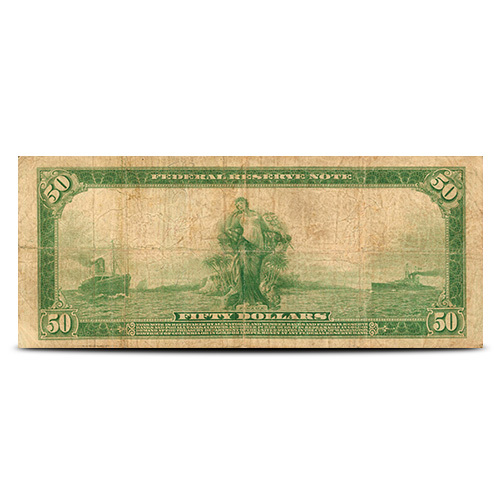 With your purchase of a 1914 $50 Federal Reserve Note in this Provident Metals listing, you will receive a note in Fine+ condition. Notes considered Fine+ have considerable signs of circulation use that include numerous fold lines, rounded corners, and margin splits. Each one of the notes available here will ship in a plastic currency sleeve.

The obverse side of 1914 $50 Federal Reserve Notes depicts President Ulysses S. Grant. This side of the note features the serial numbers, US Treasury seal, and the seal of the Federal Reserve Bank branch that released the notes into circulation.

On the reverse field of 1914 $50 Federal Reserve Notes is an artistic vignette showcasing the female allegory of Panama. She is depicted astride the isthmus of Panama where the Panama Canal was constructed by the United States in the first decade of the 20th century. Approaching the canal to make the crossing are a commercial ship on the left and a battleship on the right.

The 1914 Series Federal Reserve Notes included denominations of $5, $10, $20, $50, and $100. The presidential portraits of Abraham Lincoln, Andrew Jackson, and Ulysses S. Grant, along with Founding Father Benjamin Franklin, appeared on the $5, $10, $50, and $100 notes, respectively. President Grover Cleveland appeared on the $20 note. President Andrew Jackson was later moved to the $20 note, replacing President Cleveland, and Alexander Hamilton was placed on the $10 note. This makes President Grants effigy on the $50 and President Lincolns effigy on the $5 the longest lasting on Federal Reserve Notes.

If you have questions, were here to help. You can call Provident Metals at 800-313-3315, online through our live chat, and via our email address.