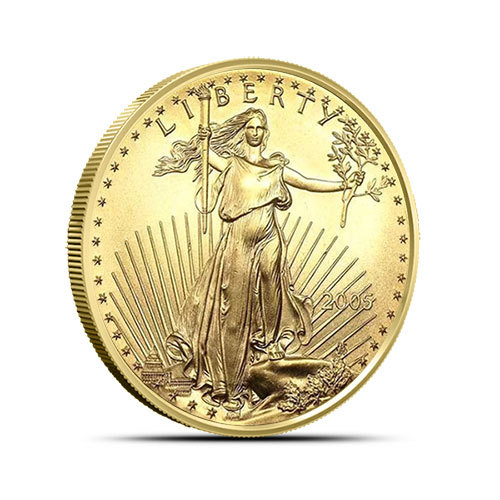 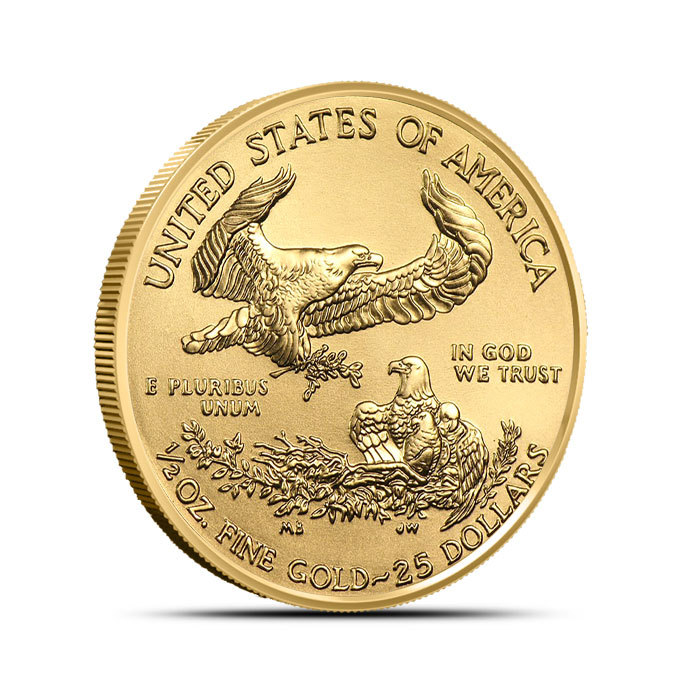 The American Eagle Gold Coin was authorized under the Gold Bullion Coin Act of 1985, and was first released in 1986. The coins are guaranteed by the US Government to contain the declared amount of actual gold weight in troy ounces, whether that be 1 oz, 1/2 oz, 1/4 oz, or 1/10 oz. The Act stipulates that the gold for these coins is required to be mined from deposits in the US or US territories, and that any profit from the sale of these American Eagle Gold coins be applied towards reducing the national debt. In 2005, the US Mint produced 80,023 1/2 oz Gold Eagle coins. Provident Metals currently has the 2005 American Eagle 1/2 oz Gold coin available for purchase.

The American Eagle Gold coin obverse features the full-length figure Lady Liberty design created by Irish-born Augustus Saint-Gaudens. She appears to be walking right off the coin. Her outstretched right hand is holding a torch and her left hand is carrying an olive branch. Her hair is flowing in the breeze. Near the bottom edge of the coin, to the left of her right foot, is a small depiction of the Capitol building. Inscriptions on the obverse are LIBERTY and 2005.

The American Eagle Gold coin reverse features a male eagle, with an olive branch in its claws, flying towards a nest occupied by an eagle family. This design is the creation of Miley Busiek and was sculpted by Sherl J. Winter. This design is claimed to illustrate the unity and family tradition of America. Inscriptions on the reverse are UNITED STATES OF AMERICA, E PLURIBUS UNUM, IN GOD WE TRUST, 1/2 OZ. FINE GOLD, and 25 DOLLARS.

Without consulting with Congress, in 1904, President Theodore Roosevelt commissioned new designs for the US coins, as he felt they no longer represented the US very well. He chose the very talented Irish-born Augustus Saint-Gaudens to redesign the US coinage. Saint-Gaudens’ initial design was an ultra high-relief $20 gold piece that required numerous strikes to bring out all of its details. It was finally modified to a normal-relief version, which was minted until 1933. The Lady Liberty obverse design of that coin is what now appears on the American Eagle Gold coins of today.

If you have questions, please contact our Provident Metals Customer Service team we are ready to answer your questions. We can be reached via phone at 800-313-3315, online via our live chat, or via our email.