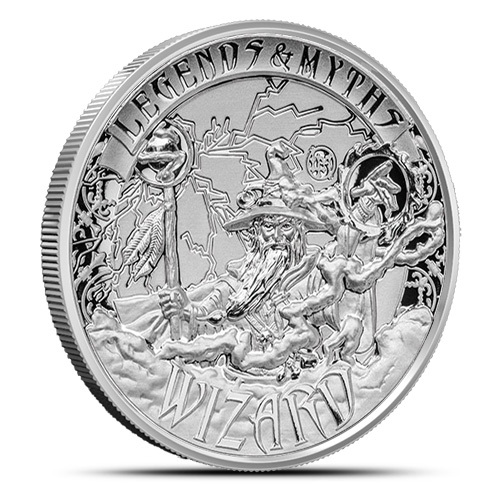 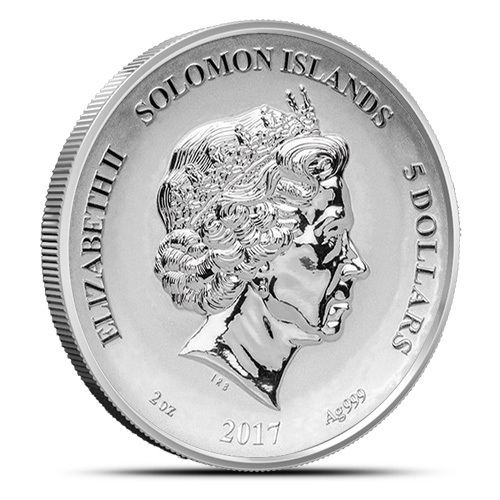 Featuring an impressive and mysterious-looking wizard, this 5th and final release of coins from the Solomon Islands Legends and Myths Series, this coin is a great way to wrap up the series. The collection, containing mythical beasts that include a centaur, dragon, elf and griffin, are well-designed, with great attention to detail maintained with each and every released design. This wizard seems a little bit less mythical, but definitely not less ferocious looking. With his staff and lightning shooting around him, this wizard with his flowing beard and stern expression seems to be a formidable foe for all of those who dare cross him.

Throughout the ages wizards have been a steady part of cultural lore in societies around the globe. Known as warlock, mage, sorcerer or wizard, this were no mere mortals. Having access to magic derived from any number of sources, depending on the story being told, some wizards are pure supernatural while others seem entrenched in tales of evil and the occult.

Wizards are often central figures in fantasy literature or in movies and television shows that tell tales of magic and fantasy. Two of the most famously depicted wizards are Merlin from the stories surrounding King Arthur and of course Gandalf.

Each of the 2017 2 oz Reverse Proof Solomon Islands Legends and Myths Wizard coins features a double high-relief striking technique that gives the coins visual depth and 3D brilliance. The reverse proof finish lends a strong, frosted appearance to the background field and a deeply-mirrored, clear image to the design set.

The obverse of the 2017 Solomon Islands Legends and Myths Wizard 1 oz Silver Coin features the effigy of Queen Elizabeth II. This right-profile relief was designed in 1998 by sculptor Ian Rank-Broadley. It is the four-generation depiction of Queen Elizabeth II since she first ascended to the throne in 1952.

The reverse of the 2017 Solomon Islands Legends and Myths Wizard 1 oz Silver Coin features the scowling wizard, wielding his staff in his right hand. Lightning appears to be emanating from the staff. Swirling mists appear to be surrounding the wizard, while his extended left hand appears to be casting a spell. The words Legends & Myths appear above the wizard, with the word Wizard below his likeness.

This collection of coins from the Solomon Islands Legends and Myths Series will add a bit of magic and mystery to the collection of any silver coin enthusiast.

At Provident Metals we encourage our customers to reach out with any questions they may have. Get expert answers to your questions by calling our toll-free number, 1-800-313-3315. Alternatively, you can send us an email detailing your questions or reach out to someone using the live chat feature on our site.