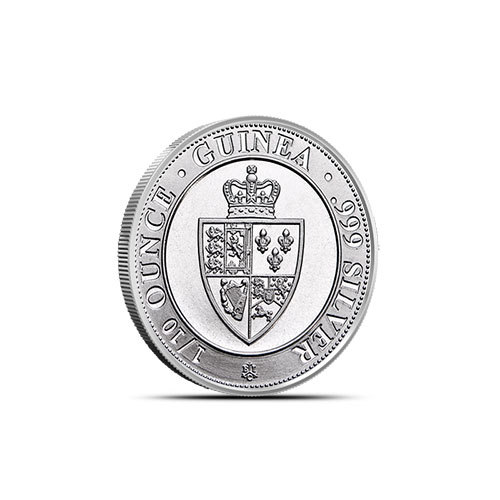 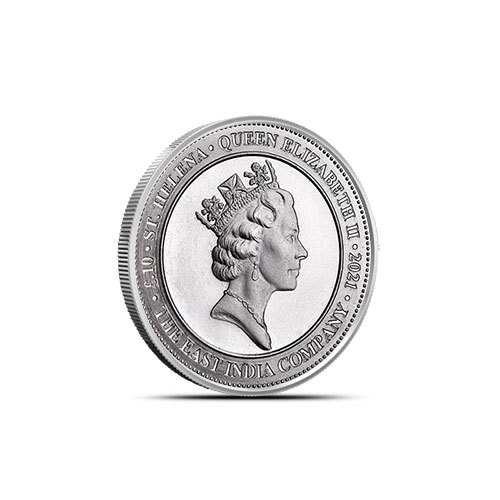 BUY BACK PRICE: $3.12
Add to WishlistLog In to add this product to your Wishlist

For more than a century and a half, the guinea was a well-known British gold coin used widely in circulation throughout Great Britain and the overseas colonies of the British Empire. The final reverse design to grace the guinea in 1787 has been revived for a silver bullion issue from the British Overseas Territory of St. Helena. Today, you have the opportunity to buy 2021 St. Helena Spade Guinea Shield 1/10 oz Silver Coins online at Provident Metals.

Between 1663 and 1814, the Royal Mint issued the gold guineas across the reigns of six different English monarchs. From King James II in 1663 to King George III in 1814, the gold guineas were issued by the Royal Mint as the first machine-struck gold coin in English history. While gold guineas were used in circulation through 1814, the last coins struck and released to the general public were produced in 1799, more than a decade after the 1787 redesign of the reverse that gave the world the Spade Guinea design.

On the obverse of 2021 St. Helena Spade Guinea Shield Silver Coins is a depiction of Queen Elizabeth II. In this right-profile effigy, Her Majesty is shown wearing the regal George IV State Diadem Crown, an official piece from the British Crown Jewels. The inscriptions on this face of the coin read 10, St. Helena, Queen Elizabeth II, 2021, and The East India Company.

The reverse side of 2021 St. Helena Spade Guinea Shield Coins includes a depiction of the Spade Guinea design from the 1787 release of gold guineas. The quartered shield in the design is topped by the Imperial State Crown and comes with the coat of arms designs for the constituent realms of Great Britain: England, Scotland, France, Ireland, and Hanover. The French fleur de lis was included in the Royal Arms of England for centuries as part of ongoing claims to the throne of France by British monarchs. The inclusion of the coat of arms for the House of Hanover reflected the ascension to the throne of England of Elector George of Hanover in 1714. Inscriptions on this side of the coin include 1/10 Ounce, Guinea, and .999 Silver.

King George IIIs spade guinea design was the second reverse image of his reign. Introduced in 1787, it replaced a larger, traditional quartered-shield design and provided a cleaner look to the reverse of the coins.

Please contact Provident Metals with any questions. Our team is available at 800-313-3315, online through our live chat, and via our email address.