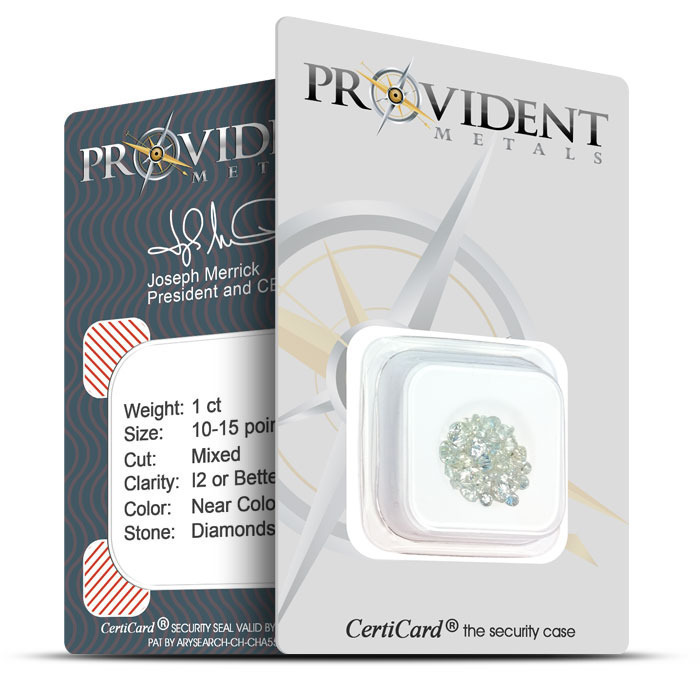 Investing in safe haven diamonds has been an alternative to metals for centuries. Demand for these gemstones continues to grow, and much like gold and silver, diamonds have long been considered a store of value.

As news of economic uncertainty continues to mount, investors are looking for innovative ways to diversify their portfolios and protect their hard-earned wealth. That’s why Provident Metals developed a new bullion product — one carat of near colorless 10-15 point diamond melee secured in a Certicard Case with I2 or better clarity.

Each Certicard Case includes 1 ct of mixed cut, predominantly round, near colorless diamond bullion melee. Small and lightweight, diamond melee is easy to store and transfer, making them ideal commodities in an emergency.

A Brief Look at the History of Diamonds

Scientifically speaking, the history of diamonds began billions of years ago, as enormous amounts of pressure and heat formed the stones more than 75 miles beneath the earth’s crust.

Eventually, volcanic activity manages to push diamonds up to the earth’s surface where they are mined, primarily in Russia, Australia, India, South America, across the African continent, and even Canada.

Yet over the course of three millennia, diamonds have had a vast and deep impact on the culture of humankind.

Diamonds were first widely used in India, and many Sanskrit texts make mention of the precious gem. Later, the stone made its way to China, where it was first used as a knife to cut jade. Indeed, the world’s oldest dated and printed book is titled the Diamond Sutra, a Chinese text from AD 868.

Over the next 600 years, the gemstone maintained its prominence as a symbol of wealth, power and strength.

In the centuries following, India remained the world’s key source of diamonds until — thanks to dwindling supplies — the stone was unearthed in Minas Gerais, Brazil in 1725. In the 1840s, diamonds were discovered in North America, though the Great Diamond Rush of South Africa took the industry by storm in 1867.

Today, though Russia and Africa reign supreme in terms of diamond production, the Ekati Mine in Canada has opened the door to new possibilities for the North American trade, which is welcoming news, considering the United States purchases more than 40 percent of the earth’s gem-quality stones.

Twenty-five hundred years can’t be wrong. Invest in a 10-15 point near colorless – 1 ctw Diamond melee Certicard Case from Provident Metals today. Use our secure online ordering system and your gems will arrive in just days.