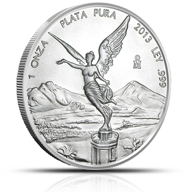 The Mexican Mint, known as La Casa de Moneda de Mexico, is North America's oldest mint–and remains one of the longest-running mints in the world. In addition to circulation coins, the mint produces bullion coins, commemorative coins, and medals for Mexico and many other nations. These coins have become a popular mainstay among numismatists and other collectors.

First established in 1535 by a royal decree from the Spanish crown, the Mexican Mint has grown into a state-of-the-art minting facility that combines rich tradition with modern technology to produce beautiful gold and silver coins.

History of the Mexican Mint

The roots of the Mexican Mint stem back the 16th century, making it the oldest operating mint in the Americas. Its story began in 1521 after the discovery of the New World and Spain's conquest of the Aztec Empire.

The Spaniards stationed in New Spain had been importing coins for use there. More specifically, they were mining for silver in New Spain, shipping it back to Europe where it was made into coins, then coins were shipped back to the Americas. This process quickly became a waste of time and material.

In 1535, Mendoza founded the region's first mint in the new capital, Ciudad de Mexico. The mint produced silver and gold coins that were widely used throughout New Spain, and their reach spread to other countries and continents as well.

Over the centuries, the mint underwent modernization, using rolling mills and screw presses to create higher quality coins. In 1778, it was decreed that the Mexican Mint would work exclusively on order of the Ministry of Finance.

During Mexico's War of Independence between 1810 and 1821, the central government wasn't able to maintain control of the country, making coin distribution impossible. The mint was forced to split up into multiple workshops spread across the country. One location was in San Luis Potosi, where silver had been found since 1592.

After struggling to strike enough coinage for the nation, the Mexican Mint adopted new technology in 1905. With new machinery and trained employees, the mint could once again operate independently of other nations.

In 1925, the Bank of Mexico–Mexico's central bank– was given exclusive power over striking coins and printing banknotes. In 1992, the mint was condensed into one state-of-the-art facility located in San Luis Potosi.

The Mexican Mint takes pride in its five centuries of history and coin production experience.

In 1992, the modern facility in San Luis Potosi was established, over 220 miles north of the mint's origins. Today, Apartado 13 is home to Mexico's National Numismatic Museum.

The Mexican Mint has come to be known for producing some of the world's most beautiful and impactful coins. The coins struck there during its first 300 years of operation were known across the western hemisphere. However, the first Mexican coin that achieved fame among collectors and investors was the Centenario gold coin, first made in 1921 to commemorate the nation's 100th anniversary of independence from Spain.

The design of the Centenario featured Winged Victory, the angel of independence, on the obverse and the Mexican coat of arms on the reverse.

The silver eight real coin and the peso (struck in both silver and gold) are two notable coins made by the Mexican Mint. The eight real coins, also called Spanish dollars, became vital to commerce in the United States before a federal coinage system was established in the 1790s. These coins were circulated throughout the Americas and Asia into the 19th century and provided the foundation for several modern national currencies, including the US dollar, the Japanese yen, and the Chinese yuan.

Libertads were (and still are) struck in both gold and silver, and they come in a variety of weights. In 2000, the obverse and reverse designs were updated to meet the expectations of modern investors and collectors. On the obverse, Winged Victory took on more detail and was positioned between twin volcanic peaks. Historic versions of the coat of arms were added to the reverse, surrounding the modern coat of arms in the center.

Bullion from the Mexican Mint offers value, alongside a small slice of North American history and culture. Add Libertads or Pesos to your portfolio and get a closer look at these beautifully crafted coins.