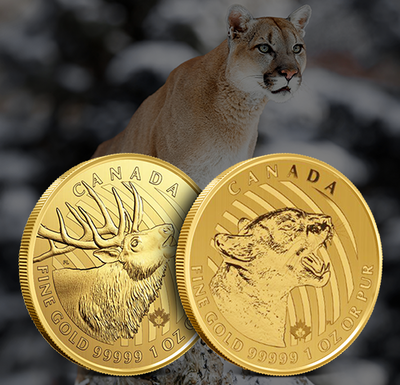 About the Call of the Wild Series

In 2014, the Royal Canadian Mint launched a new series entitled, “Call of the Wild”. The series features designs dedicated to the untamed and expansive wilderness of Canada; one coin was released annually. Each coin is composed of .99999 fine gold, making them the purest gold bullion available in the world.

This three coin series is great for investors looking to diversify investments with brilliantly designed bullion.

The inaugural release in the Call of the Wild series is the 1 oz Howling Wolf Gold Coin, produced in 2014. The wolf is one of Canada’s most iconic wilderness creatures, hunting in packs of 3-7. The coin depicts a howling wolf, filling the fields with rippling sound waves.

The Canadian gray wolf is as majestic as it is immense. The species of canine can weigh up to 175 lbs and see eye-to-eye with a 6’ man when outstretched. The animal, associated with strength and dignity, makes an ideal choice for the first coin in the series dedicated to Canadian wildlife. “CANADA” is inscribed along the top of the coin’s reverse, while “FINE GOLD 1 OZ OR PUR”, borders the bottom border of the reverse

In 2015, the 1 oz Roaring Cougar Gold Coin was released. The cougar is known for stealthily stalking its prey; the regal beast possesses speed and strength. Typically a lone creature, the cougar can overtake its victim quickly and effortlessly. While named the “Roaring Cougar”, the feline actually makes a noise closer associated to a woman’s scream when it feels it is in danger.

On its coin, the cougar is fierce and alert. A piercing scream is emitted, as shown by cascading sound waves. “CANADA” is inscribed along the top of the coin’s reverse, while “FINE GOLD 1 OZ OR PUR”, borders the bottom border of the reverse. The coin is encapsulated in a plastic card to preserve its quality and prevent environmental damage.

The third design in the series is the 1 oz Roaring Grizzly Gold Coin, which made its debut at the 2016 World Money Fair in Berlin. The grizzly bear, or the brown bear, is the second largest mammal in North America, second only to the polar bear. The predator weighs between 350-1500 lbs and can run up to 55 km per hour (34 mph). While not typically an aggressive creature to humans or most wildlife, when threatened, a bear can maul and annihilate most any foe.

The grizzly appears terrifyingly prepared to conquer his next meal. As the bear lets out a blood-curdling roar, eight lines representative of sound waves illustrate the field. “CANADA” is inscribed along the top of the coin’s reverse, while “FINE GOLD 1 OZ OR PUR”, borders the bottom border of the reverse.

The 1 oz Gold Elk Gold Coin is the fourth design to be released in the Call of the Wild Series. The elk is depicted bugling with its head back, and face upturned. Its great antlers are cast back over its great neck. The great elk is one of the largest members of the deer family, and one of the largest mammals in North America.

Elk are unique among the North American mammals for their large seasonal migrations and rut. During mating season, large groups of competing males form to win access to females. Subsequently, the males form heremistic subpopulations throughout the mating season. The elk are herbivores, and like cattle, are ungulates. The elk spends the vast majority of its time grazing, chewing, and digesting vast amounts of plants. The predators of the els are limited to the coyote, wolf, cougar, and bears.

Investing in the Call of the Wild Series

The Call of the Wild Series is an excellent investment opportunity for anyone seeking quality gold bullion paired with striking designs of some of North America’s fiercest creatures.

Not only does this series present iconic Canadian wildlife in brilliant detail, but the coins’ status as .99999 makes it an incredible way to invest in the purest gold available in the world. This is a series you do not want to miss!