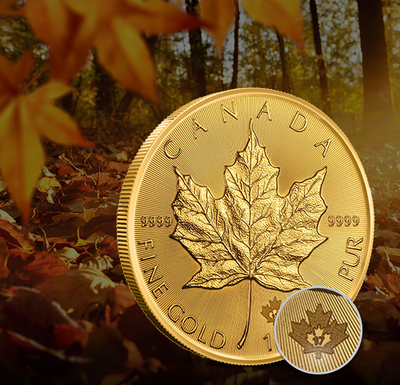 The Canadian Gold Maple Leaf has been available to investors seeking only the finest gold bullion since 1979. The Royal Canadian Mint began producing the CGM in an effort to compete with the South African Krugerrand.

The gold bullion coin typically finds itself in the portfolios of coin aficionados and investors. The Gold Maple is composed of 24 karat, .9999 fine gold, with certain special edition .99999 fine gold options, making it closer to “pure gold” than any other gold coin in the world.

Because of its status as a sovereign bullion coin produced by a member of the British Commonwealth of Nations, the Canadian Gold Maple obverse features an effigy of the current Sovereign head of Parliament. The coin has displayed several profile portraits of the monarch throughout Her reign; currently, Susanna Blunt’s rendition of Queen Elizabeth II appears on the obverse, paying homage to the longest reigning monarch in British history. Below her effigy, the face value of the coin is indicated.

The simple, aesthetically pleasing Walter Ott designed maple leaf is featured on the reverse. The effortless tribute to the Canadian symbol creates a chic and timeless design, perfect for investors and collectors. The maple is flanked by stamps noting the .9999 fine gold purity. “CANADA” borders the top of the reverse, while “FINE GOLD”, followed by the coin’s weight borders the bottom.

For a brief period of time in 1994, a 1/15 oz coin was produced. It was quickly discontinued, minting less than 5,000 coins. Finding one of these beauties could offer a nice profit from its numismatic quality.

Although the design of the coin has not seen significant change, there have been variations in the way the coin has been offered. During the first 4 years of production, the Maple Leaf was composed of .999 fine gold; beginning in November, 1982, gold maples were produced with .9999 fine gold.

In 2007, the Royal Canadian Mint produced a 100 kg Canadian Gold Maple composed .99999 fine gold and set the world record for being the largest gold coin. The coin holds a face value of $1 million; five coins were purchased by investors throughout the world. 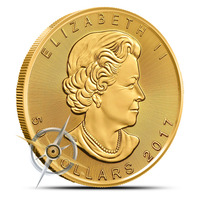 If you are looking to invest in precious metals, consider purchasing the Canadian Gold Maple. As the most pure gold bullion coin, the Gold Maple makes an ideal investment piece to add value and government backed precious metals to your portfolio.

Respected worldwide, the Maple presents investors with a classically designed coin with unparalleled security features. Radial lines surround the obverse and reverse, and a laser engraved micro privy, displaying the year of production, adds further protection from counterfeiting attempts. The Gold Maple Leaf is not only a stunning piece of bullion, it is an incredibly safe coin.