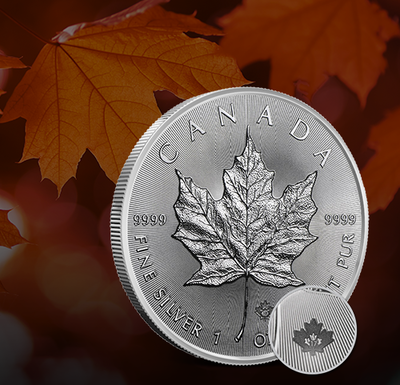 Second in popularity only to the American Silver Eagle, the Canadian Silver Maple Leaf has become well known to bullion investors and coin collectors around the world. The Silver Maple has been minted and released annually since 1988 by the Royal Canadian Mint, following the success of the introduction of the Canadian Gold Maple in 1979.

The obverse of the Silver Maple features a portrait of Queen Elizabeth II, along with the year of manufacture and the denomination of $5. This coin and series, however, derive its name from the reverse, which contains a detailed sculpt of a maple leaf. This leaf has symbolized the country of Canada since the 18th century.

One of the reasons the Silver Maple is popular is the enhanced security features used in the process of striking these coins. The Royal Canadian Mint developed a Bullion DNA program to guarantee and authenticate the coins struck there. Beginning in 2014, Silver Maples have featured fields of micro-inscribed radial lines, creating a unique pattern of light diffraction. These lines are difficult to counterfeit, making them a viable security feature. Additionally, the radial lines make the main designs even more brilliant as they appear to leap right off the coin.

The second security feature is the privy mark found on each Silver Maple’s reverse. A small, textured maple leaf is found next to the stem of the larger leaf design, micro-engraved with the last two digits of the year of manufacture. These numbers are only visible under magnification. Each of these engravings is encoded, scanned, and recorded at the mint to give each coin its own unique bullion DNA. These combined features make the Silver Maple the most secure bullion coin on the market.

Before the creation of the Royal Canadian Mint, Canada’s circulation coins were manufactured at the British Royal Mint and at the private Heaton Mint in Birmingham, England. Canadian officials eventually proposed the creation of a domestic mint in 1890. It took 18 years, but Governor General Lord Earl Gray struck the first true Canadian coin in 1908 in Ottawa. Since the mint was established, it has built a reputation for creating high quality coinage and bullion products. The mint’s characteristic innovation is what led to the Bullion DNA program.

The Canadian Silver Maple was first minted in 1988, and approximately 1 million coins were released that year. This number inflated for the next several years and then settled to a lower number during much of the 1990s. Beginning in 2006, higher quantities of Silver Maples were produced each year. In fact, 2010 broke records with about 18 million Silver Maples minted.

Over the past three decades, variations and special editions of the Silver Maple have been released to commemorate events and milestones. Some of these include 20th anniversary coins, 2010 Winter Olympic coins, and colored coins.

The Canadian Silver Maple was quick to rise to fame, and it is now recognized as one of the most popular silver bullion coins in the world. Provident makes it simple to add this international treasure to your own investment portfolio or coin collection today.